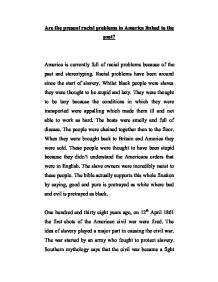 Are the present racial problems in America linked to the past?

Are the present racial problems in America linked to the past? America is currently full of racial problems because of the past and stereotyping. Racial problems have been around since the start of slavery. Whilst black people were slaves they were thought to be stupid and lazy. They were thought to be lazy because the conditions in which they were transported were appalling which made them ill and not able to work as hard. The boats were smelly and full of disease. The people were chained together then to the floor. When they were brought back to Britain and America they were sold. These people were thought to have been stupid because they didn't understand the Americans orders that were in English. The slave owners were incredibly racist to these people. The bible actually supports this whole fixation by saying, good and pure is pretrayed as white where bad and evil is pretrayed as black. One hundred and thirty eight years ago, on 12th April 1861 the first shots of the American civil war were fired. The idea of slavery played a major part in causing the civil war. The war started by an army who fought to protect slavery. Southern mythology says that the civil war became a fight not just for slavery but also for states' rights and individual freedoms. The National parks and the confederate flag remember the civil war today. 1,600 memorials were scattered over 6,000 acres of park. ...read more.

Martin Luther King Jr a member of the NAACP set up a bus boycott. The buses would lose money as black passengers made up to 80% of all people who used the bus service so the blacks would get their rights. Martin Luther King went on to found the Southern Christian Leadership Conference or the SCLC. He became mostly famous for his speech called, "I have a dream." This speech is linked to the present day by Halle Berry the first black woman to win an Oscar. She paraphrased Martin Luther King in her acceptance speech. She said, "One day maybe we will be judged on merit not on the colour of our skin." This is very similar to Martin Luther King's speech. This proves that racism does go on in America and that black people want to stop it. Similar to Martin Luther King was Malcolm X. He was born in the state of Nebraska in the U.S on May 19 1925. He was named Malcolm Little. Malcolm changed his name in 1953 to Malcolm X. He did this because he converted to the temple of Islam. Malcolm X was sentenced for eight years for armed robbery, this was when he decided to convert himself. When he changed his name he became assistant minister to the Detroit Temple and was later promoted to the New York temple. ...read more.

75% of the general public thought that he would have been found guilty if he was not famous whereas 25% thought he wouldn't have been found guilty. This isn't racist this is just unfair because he was treated differently because he was famous. The black people of America thought that he was not guilty whereas the whites voted for his guilt. This however, is racist. Most racial problems in America today are caused by terrorism, especially due to the atrocious acts submitted by Al-Qaeda on September 11th 2001. September 11th 2001 was a very sad day for not only the United States but nearly the entire population of the world. Terrorists from Afghanistan attacked the world trade centre. Is attack, which left thousands and thousands of people dead, was organised by Osama Bin Laden. Pirorr to the attacks on America Osama Bin Laden was called America's most wanted terrorist suspect. Terrorists hijacked three jumbo jets full of passengers and flew them into the twin towers of the world trade centre. When America was attacked the residents of Afghanistan celebrated. America was attacked because for more than seven years American people have been occupying the lands of Islam in the holiest places. Although no one was killed very often the Al-Qaeda (Osama Bin Laden's bunch.) weren't very happy about it so they decided to attack America. White Americans now stereotype Muslims and blacks as threats and terrorists. Most Muslims in the united states of America today are black, this also links to racism. This is an example of current racial problems in America today. ...read more.