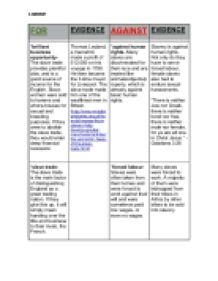 Arguments For And Against Slavery (Transatlantic Slave Trade) - table

FOR EVIDENCE AGAINST EVIDENCE *brilliant business opportunity- The slave trade provides plentiful jobs, and is a good source of income for the English. Slave-women were sold to harems and whore-houses for sexual and breeding purposes. If they were to abolish the slave trade, they would enter deep financial recession. Thomas Leyland, a mercahnt, made a profit of �12,000 on his voyage in 1798. He then became the 3-time mayor for Liverpool. The slave trade made him one of the wealthiest men in Britain. (http://www.revealinghistories.org.uk/how-did-money-from-slavery-help-develop-greater-manchester/articles/the-economic-basis-of-the-slave-trade.html) *against human rights- Many slaves are discriminated for their race and are treated like animals/objects/property, which is already against basic human rights. Slavery is against human rights. Not only do they have to serve forced labour, female slaves also had to endure sexual harassments. "There is neither Jew nor Greek, there is neither bond nor free, there is neither male nor female, for ye are all one in Christ Jesus." - Galatians 3:28 *slave trade- The slave trade is the main factor of distinguishing England as a great trading nation. If they give this up, it will simply mean handing over the title and business to their rivals, the French. *forced labour- Slaves were often taken from their homes and were forced to work against their will and were sometimes paid low wages, or even no wages. ...read more.

http://www.digitalhistory.uh.edu/historyonline/slav_fact.cfm *resources- The slave trade provides the English with many resources and raw materials which may then be made into high-demand products, such as certain equipment, food (sugar) and many other luxuries. Without the raw materials the slaves harvested, many luxuries could not be made, such as rum, as it would need sugar to be made. Rum is only one of the many new foods and drinks that were created. At first, only the higher classes were able to afford these luxuries, but as the imports from the West Indies started increasing, they quickly became an essential part of the typical British household. (http://www.revealinghistories.org.uk/smoking-drinking-and-the-british-sweet-tooth.html) *hard journey to the Americas- Slaves were typically locked up on board under the decks for up to 56 days. Sometimes there were approximately 350-600 slaves on a ship. The male captives were normally chained together by their legs whilst the women and children had somewhat more room. They were crammed into spaces sometimes less than 5 feet high. Approximately 250,000 slaves died on the middle passage, some from diseases and some from suicide. http://www.digitalhistory.uh.edu/database/article_display.cfm?HHID=68 (24/11) http://www.digitalhistory.uh.edu/database/article_display.cfm?HHID=68 (30/11) *slave money was used to help small towns to develop into metropolitan cities London Road, Old Market Street and The Manchester Town Hall was built on slave money. Slave money not only improved town conditions but also helped developed them. ...read more.

They needed to be kept healthy as healthy slaves were more valuable as they were able to work. Slave owners/plantation owner: "Contrary to the propaganda of the anti-slavers, most slaves are very happy....provided with a house and clothing..when they are sick they see a doctor.." *bad housing - Slaves lived in small houses called 'baracoons' which were generally 1mx1m and scarcely furnished. Alice Alexander: "We lived in a one room log hut, and slept on homemade rail bed steads wid cotton, an' sum times straw, mos'ly straw summers an' cotton winners." (http://newdeal.feri.org/asn/asn00.htm) *religion- Christianity is the only way to heaven and the English are doing the slaves a favour by giving them the opportunity to let them convert to Christianity through the work of missionaries and the influence of others around them, which will then lead into a better afterlife. Converting slaves to Christianity was a way to get them to have something in common with their owner, thus reducing the chance of them trying to rebel. By 1860, 15% of slaves were members of churches. (http://cghs.dadeschools.net/slavery/antebellum_slavery/plantation_slave_life/diet_religion/religion.htm) (30/11) *little freedom - The slaves did not have much freedom. *able to control slaves- People argued that if the African slaves were freed, they would rebel and there would be chaos. On Tobago there were 20 slaves for every white person. It would be hard for the English to control the slaves. There would be riots and disorder, killings and anarchy. 3-AGAINST 3-AGAINST ...read more.