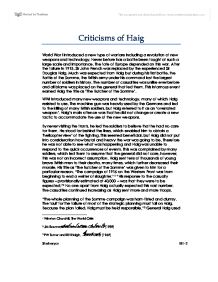 Assesement of Haig and other Generals in WW1

Criticisms of Haig World War I introduced a new type of warfare including a revolution of new weapons and technology. Never before has a battle been fought at such a large scale and importance. The fate of Europe depended on this war. After the failure in 1915, Sir John French was replaced by the experienced Sir Douglas Haig. Much was expected from Haig but during his first battle, the Battle of the Somme, the British army under his command lost the largest number of soldiers in history. The number of casualties was unlike ever before and all blame was placed on the general that led them. This infamous event earned Haig the title as 'The Butcher of the Somme'. WWI introduced many new weapons and technology, many of which Haig resisted to use. The machine gun was heavily used by the Germans and led to the killing of many British soldiers, but Haig referred to it as an 'overrated weapon'. Haig's main offence was that he did not change or create a new tactic to accommodate the use of the new weapons. By never visiting the fronts, he led the soldiers to believe that he had no care for them. He stood far behind the lines, which enabled him to obtain a 'helicopter view' of the fighting. This seemed beneficial, but Haig did not put into consideration how brutal and heavy the war was going to be. ...read more.

This took away the element of surprise which allowed the Germans to prepare. Haig had the large and powerful British navy at his command, which sadly, he did not utilise. Haig had a large army, powerful navy and many new weapons which he should have used efficiently to create an effective strategy, instead of sending his troops over the top, dozens of times. With this careless tactic, Haig gave the impression of being, as many described him as, "unimaginative and dull." A good General must not be this, but in fact be creative and able to efficiently utilise all of their resources to generate brilliant tactics. On the other hand, Haig's 'tactic' was to basically send all of his troops over the top in order to wear down Germany. Although this worked in the end, it came at a huge cost and destroyed his name. Defence of Haig and other Generals When evaluating the Generals leadership in WWI, we must not only look at the number of casualties made and blame the people in charge, but we have to evaluate the position the generals were in and their situation. WWI was a revolutionary war which introduced the use of new technology and weapons. It displayed the largest scale battle ever fought in history. The generals were set to command the largest army ever set by their respective countries. ...read more.

By the end of the battle, the British Army had suffered 420,000 casualties, the French losing 200,000 men and the Germans nearly 500,000. These figures show that all sides lost many men and were in stalemate. "The German army had been fought to a standstill and was utterly worn out."5 Haig's costly method was effective and in the end, killed more Germans than Britain's. Haig was involved in the Battle of the Somme against his will. It was due to the alliances that this war took place so this should be the reason for the many casualties. But in the end, Haig ultimately led Britain to victory in the Battle of the Somme. He continued leading Britain to their largest number of consecutive victories in history. All the countries lost hundreds of thousands of men in the war and were all in stalemate, but Britain under the command of Haig made the only breakthrough between all the generals in Britain, France and Germany. Too much responsibility and expectations were placed on Haig but in the end, it was his side that won the war. Haig should be praised for not allowing emotions to conflict with his decisions and being able to cope with all of Britain's anger placed on him. 1 Winston Churchill, The World Crisis 2 JM Bourne, Britain and the Great War (1989) 3 PW Turner and RH Haigh, Not for Glory (1969) 4 Haig, Order of the Day (11 April 1918) 5 General Ludendorff, War Memoirs (1920) ?? ?? ?? ?? Sheheryar IB1-2 ...read more.