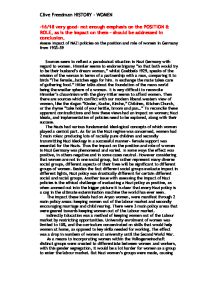 -16/18 very good- not enough emphasis on the POSITION & ROLE, as is the impact on them - should be addressed in conclusion. Assess Impact of NAZI policies on the position and role of women in Germany from 1933-39 Sources seem to reflect a paradoxical situation in Nazi Germany with regard to women. Himmler seems to endorse bigamy "so that both would try to be their husband's dream woman," whilst Goebbels 1929, speaks of the mission of the woman in terms of a partnership with a man, comparing it to birds "The female...hatches eggs for him. In exchange the mate takes care of gathering food." Hitler talks about the foundation of the mans world being the smaller sphere of a woman. It is very difficult to reconcile Himmler's chauvinism with the glory Hitler seems to afford women. Then there are sources which conflict with our modern liberal western view of women, like the slogan "Kinder, Kuche, Kirche," Children, Kitchen Church, or the rhyme "take hold of your kettle, broom and pan..." To reconcile these apparent contradictions and how these views had an impact on women; Nazi ideals, and implementation of policies need to be explored, along with their success. ...read more.

Women in Germany were more likely to work than in USA and the UK. The number of women in regular employment actually increased between 1933 and 1939 from 12,300,000 to 14,600,000 women. These statistics show that the policies failed to an extent and thus the impact on woman, was minimal to the extent it did not force them out of the workforce altogether. The second Nazi aim for Aryan women was to encourage racially pure child bearing and marriage. Aside from the women's groups which encouraged all aspects of Nazi ideology, and the education that was geared towards preparation for roles as mothers and wives (there were marriage schools, and eugenics and homemaking made up an essential compulsory part of the school curriculum;) there were policies that directly affected women with regard to Marriage, Births and Welfare. Aimed respectively at increasing suitable marriages, increasing pure German births and developing healthy Germans. With regard to marriage, in 1933, 600 RM marriage loan was introduced for unemployed women. In 1937 the loan was extended to women in work. The 1935 marriage law required certificate of "fitness to marry," before a marriage license is issued. ...read more.

All the practical policies Aryan women benefited from were completely restricted to Aryan women within the Volksgemeinschaft. For non-Aryan women the picture was extremely different For Aryan women there were many benefits in Nazi Germany, there were large loans at no interest upon marriage; 12 weeks paid maternity leave; many social organisations; generous help for poorer mothers; freed health care for pregnant women; some equal rights in divorce after 1938 and tax benefits for women with children to name but a few. The benefits took the form of practical benefits that helped with make and break issues for Aryan women, which tremendously changed a womans quality of life, particularly if she is working class. The benefits in Nazi Germany for Aryan women make up the foundation for the welfare state as we know it. Because we in the 21st Century have the benefits of the welfare state we see the position of Nazi women as being quite bad, with many constraints, however relative to the standards of the day the practical benefits of Aryan women in Germany far exceeded their French, British and American contemporaries. There was a legalistic decrease in rights, which we with our practical benefits see as significant and so very negative. The truth is without practical or legal benefits, we would really appreciate the positive impact Nazi policies, practically had on women. Clive Freedman HISTORY - WOMEN ...read more.