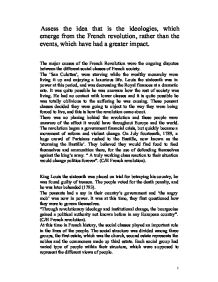 Assess the idea that is the ideologies, which emerge from the French revolution, rather than the events, which have had a greater impact.

Assess the idea that is the ideologies, which emerge from the French revolution, rather than the events, which have had a greater impact. The major causes of the French Revolution were the ongoing disputes between the different social classes of French society. The 'San Culottes', were starving while the wealthy monarchy were living it up and enjoying a luxurious life. Louis the sixteenth was in power at this period, and was decreasing the Royal finances at a dramatic rate. It was quite possible he was unaware how the rest of society was living. He had no contact with lower classes and it is quite possible he was totally oblivious to the suffering he was causing. These peasant classes decided they were going to object to the way they were being forced to live, and this is how the revolution came about. There was no planing behind the revolution and these people were unaware of the effect it would have throughout Europe and the world. The revolution began a government financial crisis, but quickly became a movement of reform and violent change. On July fourteenth, 1789, a huge crowd of Parisians rushed to the Bastille, now known as the 'storming the Bastille'. They believed they would find food to feed themselves and ammunition there, for the use of defending themselves against the king's army. ...read more.

It was the French followers of the revolution, who then became the leaders. They were called the Jacobins. They lead their system of government with the beliefs of a free and democratic state. 1793 the Jacobin leaders created a new citizen's army to fight rebellion in France and war with other European nations". (Internet site). The Jacobins came close to their objectives but were only in power for one year. The next guide for the people was Napoleon 1796. He was already known as a military hero. He was to take on a different role as a leader, than had previously been elected. Instead of looking where his previous leaders had gone wrong, he took a different route, and looked to the Romans for inspiration. Popular as a ruler because he provided the French with stability. He led a Roman type empire. The consulate had three consuls, as Napoleon was first consul, he controlled all the power. One of the major changes he brought about was that, Catholicism was re-established in France, after previously being forced underground during the revolution. He himself was a devoted Catholic. He retained control of the Church by having the authority to nominate all high church officials. He went ahead and exploited his popularity by electing himself, consul for life. ...read more.

These were human beings that had rights, and were no longer seen as someone else's property. Nationalism, is now one of the most enduring and potent ideologies of the French Revolution. For proof of this, one only has to look to the horrific and bloody struggles to see Nationalism in many African states today. This has to be said, it is by far the most dangerous ideology to have came from the revolution, as it works on the emotional side of peoples feelings and there is no telling the lengths people will go to get satisfactory results. The French Revolution, at first it seemed a failure but had far-reaching results. In France the bourgeois and land-owning classes emerged as the dominant power. Feudalism was dead; social order and contractual relations were consolidated by Napoleon. The Revolution unified France and enhanced the power of the national state. The Revolutionary and Napoleonic Wars tore down the ancient structure of Europe, hastened the advent of nationalism, and changed forever the era of modern society. It has been said, that it had an extraordinary influence on the making of the modern world, as we know it. Furthermore ideologies such as Liberalism and Secularism which may have effected Europe in the 19th century, are now being played out in South Africa and Asia. Therefore I would agree with the opening question of this essay, the ideologies which emerged from the French Revolution have had a greater impact than the actual events which took place. ...read more.