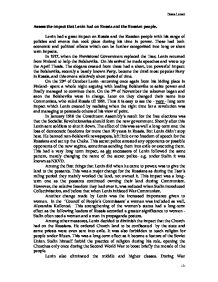 Assess the impact that Lenin had on Russia and the Russian people. Lenin had a great impact on Russia and the Russian people with his range of policies and events that took place during his time in power. These had both economic and political effects which can be further categorized into long or short term impacts. In 1917, when the Provisional Government replaced the Tsar, Lenin returned from Finland to help the Bolsheviks. On his arrival he made speeches and wrote up the April Thesis. The slogans created from these had a short, but powerful impact: the Bolsheviks, recently a barely known Party, became the third most popular Party in Russia, and this over a relatively short period of time. On the 23rd of October Lenin -returning once again from his hiding place in Finland- spent a whole night arguing with leading Bolsheviks to seize power and finally managed to convince them. On the 7th of November the takeover began and soon the Bolsheviks were in charge. Later on they changed their name into Communists, who ruled Russia till 1991. Thus it is easy to see the - very - long term impact which Lenin created by realising when the right time for a revolution was and managing to persuade others of his view of point. ...read more.

He ordered Church land to be confiscated by the state and some priests were even sent into exile. It was also forbidden to teach religion for people under fifteen. This was a long-term effect as it became a feature of the Soviet Union. Stalin himself forbid the practice of religion during his rule, opening the Churches only once during the Second World War to boost briefly the morale of the people. Lenin also eliminated the middle and higher classes. During War Communism many middle-class people sold their belongings to survive, while some nobles fled abroad. This remained the same during the 74 years of Communism in Russia, thus it can be considered a long term impact. As ending the war was crucial for the Russians at the time Lenin became leader, he sent Trotsky to negotiate peace with the Germans. The result was the harsh Treaty of Brest-Litovsk, which's short term impact was that Russia dropped out of the First World war and was able to concentrate on her internal affairs. However Russia lost huge amounts of territory and natural resources as well, which is a long term impact. ...read more.

However, the impacts of this policy were short, as soon after Lenin's death when Stalin emerged as leader, NEP was abolished as it wasn't considered to be 'Communistic' enough and Stalin believed that only a state planned economy could help Russia to become a powerful and modern industrialized country. He also minimized foreign trade with the West as the hostility between the Communists and Capitalists grew stronger. It is easy to see that Lenin had and immense impact both on Russia and its inhabitants. Short term political and economic impacts brought major and almost sudden changes to the Russians. The people barely had time to realize that the 300 year old Tsarist regime ended, that Lenin had overthrown the Provisional Government and introduced a completely different style of leadership under Communism. During the next five years he first introduced war Communism, causing the victory of the Red Army, but a devastating harvest in 1921, and then the NEP, which brought a rapid, but short-term increase in standards of living. Even after his death, his ideas influenced significantly the course of history, both of Russia's and the world's. For more than seven decades Communism and the command economy survived in Russia, and leaders after leaders followed Lenin's ideas about Communism put into practice. ?? ?? ?? ?? Diana Lucaci -- ...read more.