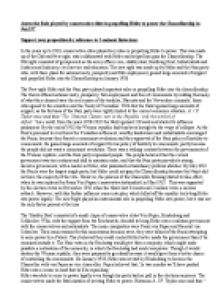 Assess the role played by conservative elites in propelling Hitler to power in Jan 1933.

﻿Assess the Role played by conservative elites in propelling Hitler to power the Chancellorship in Jan 33? Support your proposition by reference to 3 eminent historians: In the years up to 1933, conservative elites played key roles in propelling Hitler to power. This was made up of the Old and New right, who collaborated with Hitler and helped him gain the Chancellorship. The Old right consisted of groups such as the army officer core, shabby deal, Harzburg front, Industrialists and Junkers and Judiciary, civil service and education. The new right was made up by Hitler and the Nazi party who, with there plans for national unity, prosperity and full employment, gained large amounts of support and propelled Hitler into the Chancellorship on January 1933. The New right Hitler and the Nazi party played important roles in propelling Hitler into the chancellorship. The Nazi's offered national unity, prosperity, full employment and free of communism by ridding Germany of what they claimed were the real causes of the troubles, Marxists and the 'November criminals', those who agreed to the armistice and the Treaty of Versailles. With this the Nazi's gained large amounts of support, as the fortunes of the Nazi party were tightly linked to the current economic situation. ...read more.

He waited, they decided.?According to J.W. Hiden, It was perhaps inevitable that the Weimar republic collapsed, since the powerful conservative groups and the army were prepared to destroy it. Therefore Papen, Schleicher and Hindenburg must take the blame for inviting him to become Chancellor. The Shabby deal played an important role in propelling Hitler to power but was not the soul factor present at the time. Old right Harzburg front also played an important role in Propelling Hitler to the Chancellorship. It was an attempt headed by Alfred Hugenburg, a wealthy right wing nationalists, to join together all the influence and power in Germany and persuade the President, Paul von Hindenburg, to remove Chancellor Heinrich Bruning from office. Many people were not convinced with Bruning's policies as Chancellor and believed that his socialistic principles were bringing Germany down into economic disaster. On October 1931, Adolf Hitler and the Nazi party was invited to attend the meeting at Harzburg. The Party during this time was the fastest growing political party in Weimar Germany and many of the wealthy who attended the meeting shared his strong nationalistic views. The meeting as Harzburg also attracted senior military figures, representatives of the Prussian Junkers and right wing nationalists and industrialists. ...read more.

Men like Gustav Stresemann were denounced as traitors and help up to public ignominy. In the meantime, Hitler strengthened his ties with the Reichswehr and consequently gained the Chancellorship on Jan 1933. Industrialists and Junkers supported Hitler because of there fear of communism, and if Germany would fall to communist rule, government taking over their industries. If was these influential industrialists who put pressure on the Weimar government for change. It was through this support, which propelled Hitler into power. Though Industrialists played an important role, there was other groups involved played influential roles in propelling Hitler to the Chancellorship. Judiciary and Civil service up to 1933 also played an important role in helping Hitler into power. Following the Beer hall putsch of 1923, where Hitler had failed at his attempt for revolution and the overthrow of the Weimar Republic. The judiciary who were still true conservatives at heart, gave him an extremely light sentence of five years, only nine months of which he had served as he too was a conservative. As the Nazi Patry (NSDAP) had become increasingly popular mainly as a result of the great depression so too had the Conservative elites supported them. If was this combination of old and new right groups such as the shabby deal, Hitler and the Nazi party, Industrialists and Junkers, the army and the Harzburg front who consequently gave Hitler the Chancellorship on Jan 1933. ...read more.