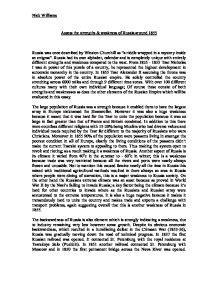 Assess the strengths &amp; weakness of Russia around 1855

Assess the strengths & weakness of Russia around 1855 Russia was once described by Winston Churchill as "a riddle wrapped in a mystery inside an enigma". Russia had its own alphabet, calendar and is completely unique with entirely different strengths and weakness compared to the west. From 1825 - 1855 Tzar Nicholas I was in power of this puzzle of a country, he represented the highest development in autocratic monarchy in the country. In 1855 Tzar Alexander II assuming the throne was in absolute power of the entire Russian empire. He solely controlled the country stretching across 6000 miles and through 9 different time zones. With over 100 different cultures many with their own individual language; Of course these consist of both strengths and weaknesses as does the other elements of the Russian Empire which will be evaluated in this essay. The large population of Russia was a strength because it enabled them to have the largest army in Europe nicknamed the Steamroller. However it was also a huge weakness because it meant that it was hard for the Tzar to unite the population because it was so large in fact greater than that of France and Britain combined. In addition to this there were countless different religions with 15-20% being Muslim who had diverse values and individual needs required by the Tzar far different to the majority of Russians who were Christians. ...read more.

The name Tzar is from Tzarder former emperors of Europe. Tzars believe in 'Divine rights of kings' this means that they are a gift from god so every decision they make that is questioned is questioning God. Also any lessening of power would be virtual blasphemy. The problem and weaknesses of this system is that unsuitable leaders inherit power; a prime example of this is Nicholas II. This again enforces the backwardness of Russia because this resembles France in 18th century. This kind of old fashioned system leads to revolution with new ideas to satisfy the peasant majority. Another weakness is the Tzar having complete economic control, with very limited knowledge of economics, this is not maximising the economic potential of the country. Under Alexander II the industrial workforce expanded from 860,000 - 1,320,000 people by 1887 this is tiny compared to the population of Russia. Some economic strengths of Russia include some oil success and new industrial areas such as Ukraine & Urals not to mention textile industries around Moscow expanding. The main strength of the Russian empire was the abolishment of the serfdom system. A Serf was basically a slave. There were more the 22 million serfs compared to 4 million slaves in the United States. ...read more.

On the whole these vitally important reforms where a colossal strength to Russia, they were modernizing the whole country. Alexander was simply copying western ideas which he discovered on visits there. However there still remained weakness involved with these new reforms in the form of opposition. The new openness encouraged by the reforms provoked expectations that the Tzar could not satisfy. This made the political stability of the Tzarist system questionable and looking forward a few years ahead of the question this does escalate into an assassination of Alexander II. In conclusion, when Alexander II came to the throne in 1855 he faced many problems, the most drastic I think was the existing serfdom system. Alexander decided to resolve these problems b introducing new reforms, the most famous and most needed in my opinion is the abolishment of serfdom. But as actual abolishment was after 1855, Russia's serfdom community was still very much alive consequently was still a huge weakness, and illustrated their backwardness in 1855. So overall after weighing up the strengths and weakness of Russia at that time, I would definitely consider there to be more weakness in the Russian empire. I do acknowledge that Alexander II employed some key reforms; however Russia remained 50 - 100 years behind the west in sheer development of the country in 1855. ?? ?? ?? ?? Nick Williams ...read more.