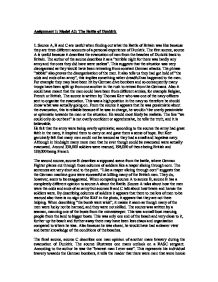 Assignment 1: Model A2: The Battle of Dunkirk

Assignment 1: Model A2: The Battle of Dunkirk 1. Source A, B and C are useful when finding out what the Battle of Britain was like because they are three different accounts of a personal experience of Dunkirk. The first source, source A is useful because it describes the evacuation of men from the beaches of Dunkirk back to Britain. The author of the source describes it as a "terrible night for there was hardly any army and the ones they did have were useless". This suggests that the situation was very disorganised as they would have been retreating from constant German attacks. The phrase "rabble" also proves the disorganisation of the men. It also tells us they had got hold of "the odds and ends of an army", this implies something rather dreadful has happened to the men. For example they may have been hit by German dive bombers and so consequently many troops have been split up from one another in the rush to retreat from the Germans. Also it could have meant that the men could have been from different armies, for example Belgian, French or British. ...read more.

When describing "the bomb went wide", it makes it seem as though many of the men were lucky not be harmed, and they were not skilled. The source was written by a seaman, manning one of the boats from the minesweeper. This was a small boat rescuing people from the land to bigger boats. This was only one end of the beach and very close to it, further up the beach and further away there may have been less chaos and organisation compared to where he was. Also because he was closer, he would have had a clearer view and better knowledge of the conditions of the beaches. The final source, source C describes one man opinion of another mans bravery during the evacuation of Dunkirk. The source illustrates one mans outlook on a RASC sergeant. According to the author he was the "bravest man I ever saw". This represents his individual bravery towards the German bombers, it tells the reader that there were men that were heroic and fought against the Germans single handily. When the German Heinkel planes came back to attack, he "grabbed his gun and shot at them". ...read more.

Therefore his opinion will be more reliable than the others as he was in a high up and respected position of the navy. Also he would therefore have had an overview of everything and had a better idea of the plans for the evacuation. What could make it even more reliable was if we had a German point of view in one of these sources, because they are all from British men therefore only have one countries point of view of it all. If there was a German point of view, the reader could learn about the evacuation from their knowledge and gain information as they may have had a different experience as they were the attackers. Although the sources are not useful because they are all only one mans opinion of the evacuation and it took place at only one place of the beach. For perhaps on another part of the beach they were lined up in columns with great organisation. Furthermore, this was only one moment out of the whole of the Battle, on other days it may have been worse or more unperturbed for the men. Also he was in the navy; there is nothing in the source telling the reader about what the Battle was like from the armies or citizens point of view. ...read more.