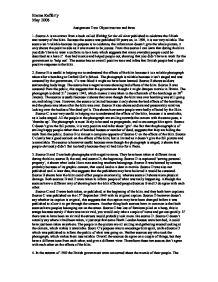 Assignment Two: Objectives two and three 1. Source A is an extract from a book called Waiting for the all clear published to celebrate the fiftieth anniversary of the blitz. Because the source was published 50 years on, in 1990, it is not very reliable. The source isn't reliable because its purpose is to celebrate, the information doesn't give the whole picture, it only shows the positive side as it was meant to be joyous. From this source I can learn that during the blitz you didn't have to wear a uniform to be a hero which suggests that many everyday people could be described as a hero if they had morale and helped people out, showing that you didn't have to work for the government to 'help out'. The source has an overall positive tone and infers that British people had a good positive response to the blitz. 2. Source B is useful in helping me to understand the effects of the blitz because it is a reliable photograph taken after a bombing at Catford Girl's School. ...read more.

The photograph is most likely to be used as propaganda, and to encourage blitz spirit. Source C doesn't give the full picture, it is very positive and talks about 'grit'. the fact that the photograph is of smiling happy people rather than of bombed houses or number of dead, suggests that they are hiding the truth from the public. Source B is almost a complete opposite of Source C on the effects of the blitz. Source C clearly has a good outlook on the effects of the blitz, but is limited as it doesn't give the full picture and is unreliable. The source is however useful because even though the photograph is staged, it shows that people obviously didn't feel too badly because they all had time for a Photo. 3. Source B and D are both photographs with negative tones. They have been taken at different times during the blitz, source B; the end, and source D; the beginning. Source D is captioned 'sorting personal property', it shows what looks like a man stealing anothers belongings. ...read more.

If there was to have been an air raid the streets would probably look more like source D. Source C doesn't actually say where it had been taken, it just says that some North London houses were bombed, it could have just been taken anywhere. The people in the picture are all smiling and gathering around looking at the camera, which makes it unreliable. Sourc C's purpose was to encourage blitz spirit, unlike Source D which was published to inform the public of what was going on. Neither sources say who took the photograph, which makes them less reliable. Overall the sources do agree on a couple of things, but they have a different tone from each other, and give a different view. Therefoore these two souces don't agree with each other on the effects of the blitz. 4. In the autumn of 1940 the British government were concerned about the morale of their people. The government had a good rason to fear morale in the autumn of 1940. Source E is a secret report to the government. ?? ?? ?? ?? Emma Rafferty May 2008 ...read more.