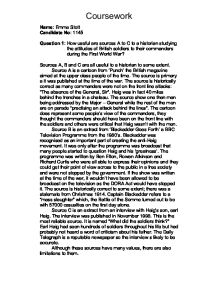 Name: Emma Stott Candidate No: 1145 Question 1: How useful are sources A to C to a historian studying the attitudes of British soldiers to their commanders during the First World War? Sources A, B and C are all useful to a historian to some extent. Source A is a cartoon from 'Punch' the British magazine aimed at the upper class people of the time. The source is primary a it was published at the time of the war. The source is historically correct as many commanders were not on the front line attacks: "The absence of the General, Sir". Haig was in fact 40 miles behind the trenches in a chateau. The source show one then men being addressed by the Major - General while the rest of the men are on parade "practising an attack behind the lines". The cartoon does represent some people's view of the commanders, they thought the commanders should have been on the front line with the soldiers and others were critical that Haig wasn't with the men. Source B is an extract from 'Blackadder Goes Forth' a BBC Television Programme from the 1980's. Blackadder was recognised as an important part of creating the anti-Haig movement. It was only after the programme was broadcast that many people started to question Haig and his 'greatness'. The programme was written by Ben Elton, Rowan Atkinson and Richard Curtis who were all able to express their opinions and they could get their point of view across to the public in a free society and were not stopped by the government. ...read more.

Is there sufficient evidence in sources C to L to support this interpretation? Sources C to L do agree with John Keegan's view of Haig, to some extent. Source C is an extract from the Daily Telegraph's interview with Earl Haig it was published in November 1998 and is called "what did the soldiers think?" Earl Haig said "It is high time my father was given credit..." this statement agrees with Keegan's view on Haig. The information in the source is true and as the interview was from the Daily Telegraph, a reputable newspaper the information in the source is likely to be accurate. Earl Haig has seen hundreds of soldiers in his life and most of them probably have complimented Haig so as to not offend Earl Haig. Part 1 of source E is a diary entry written by Haig prior to the Battle of Somme. In the source, Haig is warning the government that casualties were inevitably going to be high. Haig was actually correct and was aware of the severity of the situation. It is his own notes from the time so the source I primary and it reflects his view of what was happening. However, the source only shows a small amount of his notes and does not show his compassion towards death. Haig thought that if you die you go to a better place, so he thought he was doing the soldiers a favour by letting them go to a better place. ...read more.

Various people admire Haig fro wanting to carry on fighting despite what the politicians told him to do. Sources C to L also disagree with Keegan view of Haig to some degree. Source D is a poster which is criticising lord Kitchener's famous recruitment poster. It shows criticism of the tactics used and it is accurate as casualties were high, at the battle of Somme for example 57000 lives were lost. However, it only shows one view and is therefore biased. It is critical of Haig and is mocking him. It was used in the 1960's during the anti-Haig debate, which makes it a secondary source. Parts 2 and 3 of source E disagree with Keegan. Part 2 was written the day before the attack at Somme. Haig was obviously 'in the dark about what was happening on the front line as he wrote that "the barbed wire has never been so well cut" but my own knowledge tells me that Germany was far more prepared with the barbed wire and artillery. Haig also wrote "the men are in splendid spirits" which leads me to think that Haig had no proper idea of what was going on at the front line. Part 3 was written after day 1 of the battle of Somme; Haig said it was a "very successful attack" which was far from the truth as there were massive casualties. The source is accurate as it was Haig's own personal opinion and a reflection f his view, it also shows Haig's state of mind. However, the information is inaccurate and Haig was misinformed. ...read more.