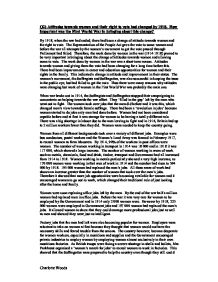 Attitudes towards women and their right to vote had changed by 1918. How important was the First World War in bringing about this change?

Q2) Attitudes towards women and their right to vote had changed by 1918. How important was the First World War in bringing about this change? By 1918, when the war had ended, there had been a change of attitude towards women and the right to vote. The Representation of the People Act gave the vote to some women and before the war all attempts by the women's movement to get the vote passed through Parliament had failed. Therefore, the work done by women in the war (1914-1918) proved to be very important in bringing about the change of attitudes towards women and allowing some to vote. The work done by women in the war was a short-term reason. Attitudes towards women and giving them the vote had been changing for a long time before this. There had been improvements in career and education opportunities for women and their rights in the family. This indicated a change in attitude and improvement in their status. The women's movement, the Suffragists and Suffragettes, was also successful in keeping the issue in the public eye, but had failed to get the vote. Thus there were many reasons why attitudes were changing but work of women in the First World War was probably the main one. When war broke out in 1914, the Suffragists and Suffragettes stopped their campaigning to concentrate on helping towards the war effort. They 'filled in the gap' left by the men who went out to fight. The women took over jobs that the men did before and it was this, which changed men's view towards female suffrage. ...read more.

men's work...When the war is over the question will then arise about women's labour and their function in the new order of things. I would find it impossible to withhold from women the power and right of making their voices directly heard.' His attitude had changed greatly because before the war, when asked about female suffrage, he said 'wholly out of the question' on the grounds that it was against their nature and role. This supports the idea that it was the work that the women did in the war, which helped them achieve the right to vote. His view now was that it would be unfair to withhold women anymore from voting because they have shown how important they are in society. Another quote that shows people realised that women were needed is from The Observer and was written by JL Garvin in 1916. He said 'Time was when I thought that men alone maintained the State. Now I know that men alone could never have maintained it, and that henceforth the modern State must be dependant on men and women alike.' This shows the typical attitude change that people had after the war. Another reason why attitudes towards women and the vote after the war was that because women had done so much work for the country and the war effort, they had earned the right to vote and the Government owed it to them, as they deserved it. The Suffragists and Suffragettes immediately stopped their campaigning to support the country. This showed they were prepared to put their country first and forget about their interests for the time being so Britain would be successful in the war. ...read more.

These sorts of methods also kept the issue in the public eye, as the Government had to do something about it and could not ignore it, otherwise a lot more damage would be caused to the country. Women's actions during the war were the most important reason in bringing about the change in attitude towards women and their right to vote in 1918. The work they did when they replaced the men's jobs was of equal standard, so they proved themselves to be as capable as men and as skilled. Therefore the attitude was that women could be trusted with the vote and were just as skilled to be able to vote in general elections. The Government could not ignore the work women did on the home front, and they deserved to have the right to vote and a say in the running of the. It showed they were just as important as men in society. Women would have probably gained the vote eventually but it would have taken longer. This was the main reason for the attitude change towards women and their right to vote in 1918, but there were other long-term reasons that gradually brought about this change before 1914. There had been improvements to women's status and role in society, and they were beginning to not be looked on as something more than second-class citizens. There were improvements in the 19th century to women's career opportunities, education and matrimonial rights. Also, the work of the Suffragists and Suffragettes kept the issue in the public eye and raised awareness. This helped women to get the vote sooner. Charlotte Woods ...read more.