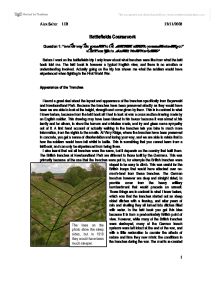 Battlefields Coursework Question 1: "In what way has your visit to the battlefields added to your understanding of what it was like to be a First World War Soldier" Before I went on the battlefields trip I only knew about what trenches were like from what the text book told me. The text book is however a typical English view, and there is no emotion or understanding involved. Actually going on the trip has shown me what the soldiers would have experienced when fighting in the First World War. Appearance of the Trenches I learnt a great deal about the layout and appearance of the trenches specifically from Bayerwald and Newfoundland Park. Because the trenches have been preserved exactly as they would have been we are able to look at the height, strength and cover given by them. This is in contrast to what I knew before, because from the text book all I had to look at was a cross section drawing made by an English soldier. This drawing may have been biased in his favour because it was aimed at his family and for others, to show the horrors and mistakes made, and try and glean some sympathy out of it. A first hand account of actually walking in the trenches lets you take in much more information, from the sights to the smells. At Vimy Ridge, where the trenches have been preserved in concrete, you get a sense of disorientation and losing your way, and we are able to relate that to how the soldiers would have felt whilst in battle. This is something that you cannot learn from a textbook, and can only be experienced from being there. I also learnt that not all trenches were the same, but it depends on the country that built them. The British trenches at Newfoundland Park are different to those built by the Germans. ...read more.

Seeing pictures of hardened soldiers playing with kittens, or training dogs, is a very moving thing, and one that no text book could convey. In conjunction with my previous experience of understanding what terrors the soldiers had to face, it is easy for me to understand why soldiers might make such efforts to escape to their own little world. With the conditions in the trenches it is easy for someone to understand how a soldier would have felt. The typical weather during the First World War was rain, fog and snow. The bottoms of the poorly built trenches would have been filled with a thick mud which made feet freezing and wet. The painful condition "Trench Foot" would have affected many hundreds of men, causing loss of feeling, rotting and ultimately amputation of the foot. Having to live with this awful condition along with (according to sources at Flanders Field Museum) lice, which itched and made you feel dirty and unwashed, rats, which helped to scare the soldiers into madness, and finally nits, which had to be removed on a regular basis, must have lowered the troops spirits a greatly. Another huge thing that would have lowered the troop's morale is court marshalling. Many soldiers suffered from shell-shock, an infliction caused from a bomb exploding too close to a person, causing loss if memory, confusion and dizziness. Soldiers who suffered from this may have deserted or disobeyed orders because they were confused and wanted to escape. The army was extremely tough on insubordinations like deserting or cowardice or disobeying orders and the most common punishment was death by firing squad. At Poperinge there is evidence that this was practised from the Execution post, and actually seeing a post riddled with scars of bullets gives us an empathetic view of a soldier's fate in this way. A text book can only describe what happened, but only by being there can someone truly be emotionally involved. ...read more.

The Editor of the British Legion Journal emphasised that ex-servicemen did not return to the battlefields because they were curious, or because they liked the places, but out of comradeship. The cemeteries provided the regimental badges of each soldier for this reason on their gravestones, and the inscriptions are 100% accurate. This is needed because the veterans themselves may have buried their friends, and an incorrect inscription such as the date of death or age may have angered them. Some of the cemeteries are located where the fighting took place, such as the Devonshire, and it would have been emotional and moving for the veterans to return to the place where their friends were killed. Although there few War Veterans remain, there would have been more when battlefield tours started, and therefore places like Talbot House were renovated to provide accommodation. As it said on the sign, Talbot House was "Everyman's Club: 1915 -- " meaning that it was and is a club for everyone, regardless of rank or age. Since there is no end date on the sign, the club must still be open, and veterans went and stayed in the place they did when they were soldiers. This was needed to encourage other veterans to come and stay, and thus bring money into the area. The cemeteries and memorials are mainly different to cater for these three groups: Tourists, Relatives and Veterans. They contain different features so as to give each party a true experience in everything that they would have wanted from the 1920's and onwards to the present day. They commemorate those who died in the First World War in different ways, and these are appreciated by all who visit the cemeteries and memorials to the dead of the First World War. 1 On a .303 Vickers machine gun, the standard issue machine gun for the British Army. 2 For more detailed explanation see Part 2 below ?? ?? ?? ?? Alex Salter 11B 13/11/2008 1 ...read more.