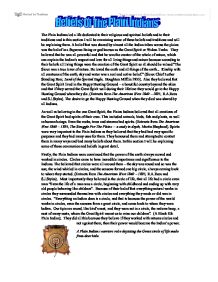 Beliefs of the Plain Indians

The Plain Indians led a life dedicated to their religious and spiritual beliefs and to their traditions and in this section I will be examining some of these beliefs and traditions and will be explaining them. A belief that was shared by almost all the Indian tribes across the plains was the belief in a Supreme Being or god known as the Great Spirit or Waken Tanka. They believed that he was all powerful and that he was the creator of the whole of nature, which can explain the Indian's respect and love for all living things and nature because according to their beliefs all living things were the creation of the Great Spirit so all should be valued "The Sioux was a true lover of nature. He loved the earth and all things of the earth... Kinship with all creatures of the earth, sky and water was a real and active belief." (Sioux Chief Luther Standing Bear, Land of the Spotted Eagle, Houghton Mifflin 1933). Also they believed that the Great Spirit lived in the Happy Hunting Ground - a beautiful country beyond the skies and that if they served the Great Spirit well during their lifetime they would go to the Happy Hunting Ground when they die. (Extracts from The American West 1840 - 1895, R.A.Rees and S.J.Styles). The desire to go the Happy Hunting Ground when they died was shared by all Indians. ...read more.

until they received their vision, which would be connected to nature. Finally, they would return to the tribe and have their vision interpreted by a Medicine Man and then the youth would receive his adult name, which would be connected to his vision. "Young men go up to a hill, cry and pray for some animal or bird to come to them. For five or six days they neither ate nor drink, and they became thin. While in this state they dream, and whatever animal they see in their dreams becomes their medicine and guardian through life." (J.G.Frazer, The Native Races of America, Lund Humphries 1939). It was different for girls. Indians believed that women could easily make contact with the spirit world, and they believed they gained this ability when they hit puberty and had their first menstrual cycle. They would then get special training from the Medicine Man on how to control this link and to prevent the spirits from over powering her and would be given her adult name, which was often celebrated by a feast. Fourthly, the Indians believed that the Medicine Men of their tribe could contact the spirits and use their power. The Medicine Men were men, who had special powers. They were usually men, who had unusual wisdom and very strong personalities. The Medicine Men were essential to the tribe because of his ability to make contact with the spirits of all living things. ...read more.

First, their bodies were painted by the holy men. Then each would cut a place in his back or chest, so that a strip of rawhide, fastened to the top of the tree, could be pushed through the flesh and tied. Then the man would get up and dance to the drums, leaning on the rawhide strip as long as he could stand the pain or until the flesh tore." (A Black Elk describing the Sun Dance, in Neihardt, Black Elk Speaks).Sitting Bull had once taken part in one of these ceremonies for four days before he received his great vision of victory against the US army in the Battle of Little Bighorn. ' A painting of the Sun Dance, By George Catlin Indians had Strong beliefs on the land, they loved the land and it was very dear to them. "Our Land here is the dearest thing on earth to us." (White Thunder - a Sioux Indian, in Dee Brown, Bury My Heart at Wounded Knee, Barrie and Jenkins 1971). The Indians believed they were part of the earth - they came from it and returned to it when they died. They also believed that land belonged to everyone and so no - one owned it and they believed that some places on earth were sacred. For Example, high places were sacred because they were closer to the spirit world, The Black Hills is one of this scared high places. The Indians never sowed or planted anything in the land because they believed that to do so is like ripping open mother earth's chest. ...read more.