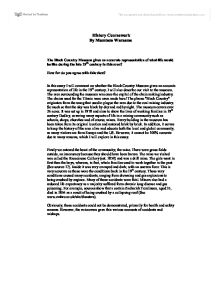 History Coursework By Momtaza Warsame The Black Country Museum gives an accurate representation of what life would be like during the late 19th century in this area? How far do you agree with this view? In this essay I will comment on whether the Black Country Museum gives an accurate representation of life in the 19th century. I will also describe our visit to the museum. The area surrounding the museum was once the capital of the chain making industry. The chains used for the Titanic were even made here! The phrase ''Black Country'' originates from the smog that used to plague the area due to the coal mining industry. So much so that the sky was black by day and red by night. The museum covers over 26 acres. It was set up in 1978 and aims to show the lives of working families in 19th century Dudley, covering many aspects of life in a mining community such as schools, shops, churches and of course, mines. Every building in the museum has been taken from its original location and restored brick by brick. In addition, it serves to keep the history of the area alive and educate both the local and global community, as many visitors are from Europe and the US. ...read more.

As for the building, the room was far too spacious and the windows modernized. This was a clear inaccuracy. The rooms were lit with electric lights, which evidently would not have been available until 1879. Furthermore, the teacher, although quite strict, was not nearly as unapproachable as I imagined. Dunce caps were not used as a punishment and a round of applause followed every correct answer given by students. Schooling dealt with every-day situations All in all this was a generally accurate representation of schooling due to the setting and curriculum. However, the school contained more inaccuracies compared to the mine and other areas we visited. Most houses were semi-detached, an accurate reflection on 19th century housing (See sources on domestic life). Families sharing toilets was the norm. It is important to note that community ties were very strong, especially in close-knit mining areas such as the Black Country. Inside, the houses were packed with furniture. Furniture such as mahogany drawers, glass-fronted cupboards, and silver cutlery were luxuries enjoyed by the wealthy. In contrast, an average miner's home was basic (See source 10). Coal fires were burnt 24/7, hence the smog bellowing out of chimneys that gave the area its name. ...read more.

The prices and actual sweets were true to life; from pear drops to troach sweets, firm Black Country favorites. We were given a demonstration of how sweets were made and packaged. While Mr. Cook ran a professional business many families made sweets part-time to increase the family income. However, some of the sweets sold dated from later periods. Likewise, the prices of some products were rather expensive for a shop catering for the working class. Such few inaccuracies meant T Cook's sweet shop is the most historically accurate feature we visited . T Cook made and sold firm Black Country favorites To conclude, the Black Country Museum is, to a certain extent, a largely accurate portrayal of life in a 19th century mining community. From the costumes of the guides to the actual buildings each aspect of the museum has been carefully researched. That, however, does not rule out errors. There were some trivial inaccuracies that I observed. The school, in particular, contained several inaccuracies. For the most part, the Black Country Museum is a worthwhile educational experience that presents life as it would have been over 150 years ago. In this respect, it represents a time period which shaped not only Dudley, but the whole of Britain. ...read more.