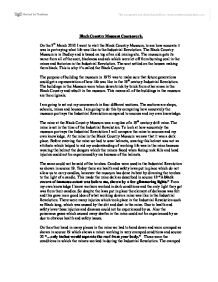 Caning was common. We went through the act of checking hands; this was a common practise in schools at the time of the Industrial Revolution. If the nails or hands of a pupil were dirty they would get the cane. One of the main points of accuracy was the easel at the front of the classroom. This is shown in source 5. The backboard/easel was the only way the teacher could displays information to the class. We also wrote on slates, this was an accuracy. In source 3 and 5 we can see that children in the Industrial Revolution also wrote on slates. The slates are also an inaccuracy as at the time of the Industrial Revolution the children wrote on big slates as they had no way to record their work for the day and so had to use a big slate so all of their work for the day could be recorded. The slates we used were smaller replicas of slates in the Industrial Revolution. We used smaller slates as the slates provided to the museum were made in a factory which only makes small slates. However writing on the slates gave us an insight into what it was like for pupils during the Industrial Revolution. Another accuracy was that ladies entered and left the room first, they also got caned first. ...read more.

The museum did not add fire escapes as adding them would take away the authenticity of the buildings. By law no building can be visited unless it has a fire escape. We also didn't get the impression of overcrowding in the houses, from my own knowledge I know there were in one poor house five families one to each room with about ten children in each family. We didn't get this impression at the museum as there were no people in the houses but the museum did try to give us the impression over crowdedness by taking the whole group into one room at the same time. There were no cellars at the Black Country Museum this is because the government act of 1842 which banned cellars. In source 6 "...cellars are let off as separate dwellings..." we could not these as the museum was set after the law banning cellars was set. One accuracy was the furniture in the rich cottage. In source 8 "they are stuffed with furniture." The source was proven to be right at the museum as the cottage had a lot of furniture including a bed, fireplace and a chest of drawers. Despite what the museum tried to do to portray the houses I didn't get a good impression of what the houses were like on the outside but I got an impression of how they were organised and decorated on the inside which did accurately portray the conditions in the Industrial Revolution. ...read more.