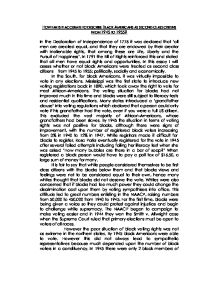 Blacks as second class citizens from 1945-55in USA

HOW FAR IS IT ACCURATE TO DESCRIBE BLACK AMERICANS AS SECOND CLASS CITIZENS FROM 1945 TO 1955? In the Declaration of Independence of 1776 it was declared that 'all men are created equal, and that they are endowed by their creator with inalienable rights, that among these are Life, Liberty and the Pursuit of Happiness'. In 1791 the Bill of Rights reinforced this and stated that all men have equal rights and opportunities. In this essay I will assess whether or not black Americans were treated as second class citizens from 1945 to 1955; politically, socially and economically. In the South, for black Americans, it was virtually impossible to vote in any elections. Mississippi was the first state to introduce new voting registrations back in 1890, which took away the right to vote for most African-Americans. The voting situation for blacks had not improved much in this time and blacks were still subject to literacy tests and residential qualifications. ...read more.

However the poor situation of black voting rights was not as extreme in the northern states. By 1945 black Americans were able to vote. However this did not always lead to sympathetic representatives because much depended upon the number of black voters in a constituency. In 1945 there were only 2 black members of Congress, hardly a fair representation of the number of black Americans in the country. Even in 1945, after WWII when Americans fought for democracy and freedom and to abolish fascism in Europe, black Americans faced daily segregation especially in the South. There were segregated schools and the black ones were usually inferior. Even if you were well educated if you were black you were banned from sitting alongside a white person in restaurants, cinemas or public transport. In 1945 southern blacks suffered de jure segregation under the Jim Crow laws that had first been introduced nearly 60 years previously. It was written into state laws that there should be separate waiting rooms, education, buses and even burial between whites and blacks. ...read more.

Many found work in the car industry in Detroit and the meat packing factories in Chicago. A. Philip Randolph saw that pressure on the government and the use of black economic power propelled the quest for equality forwards. In the South, however, blacks were still being treated as second class citizens economically. They could only find work in the worst menial jobs. Their colour trapped most African-Americans in low paid jobs that wasted any potential. In Texas, future president LBJ realised that in the segregation and inferior work that blacks had to do there was much waste being made of abilities that could help to develop the region. Black soldiers also found it very difficult to find work after returning home and found little respect or gratitude for their services in WWII. The middle class held the key to any development in civil rights. Most of the new members of the NAACP were middle class. In 1944 the GI Bill of Rights offered great educational opportunities and war veterans were free to attend the educational institution of their choice. ...read more.