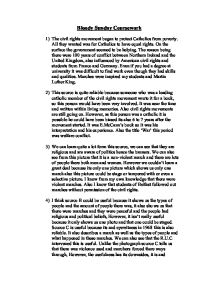 Bloody Sunday Coursework 1) The civil rights movement began to protect Catholics from poverty. All they wanted was for Catholics to have equal rights. On the surface the government seemed to be helping. The reason being there were 100 years of conflict between Northern Ireland and the United Kingdom, also influenced by American civil rights and students from France and Germany. Even if you had a degree at university it was difficult to find work even though they had skills and qualities. Marches were inspired my students and Martin Luther King. 2) This source is quite reliable because someone who was a leading catholic member of the civil rights movement wrote it for a book, so this person would have been very involved. It was near the time and written within living memories. Also civil rights movements are still going on. However, as this person was a catholic it is possible he could have been biased its also 6 to 7 years after the movement started. It was E.McCann's book so it was his interpretation and his experience. Also the title 'War' this period was welfare conflict. ...read more.

5) Sources D and E differ in may ways such as source D is written by M Farrell a catholic Civil Rights student leader while on the other hand source E is by T O'Neill the prime minister of northern Ireland who was liberal. They differ because source D was in 1876, which is seven years after the incident, which means his thought, and ways could have changed over the years. While source E is the same year while the event is still fresh in memory. Also source D is sating the Catholics are innocent and the police are unfair unlike in source E where he has to be cautious about what he says but he isn't going to say that the police acted inappropriately. 6) There is much strength such as because it's an official it would have been well researched and well financed also there is an accurate picture of events. The proportion is the same as in the House of Commons. There is a very wide access of information because there are different types of parties writing the report. ...read more.

This was more to do with student rights because it was the time of the student revolution throughout Europe. Source E is showing that marches in 1969 got more violent. However, as it's a speech made by the prime minister he is very cautious and restrained by what he can say. But for him to call them 'Hooligans' then I think this proves that there was tension in Northern Ireland. Source F suggests violence but not in any way does it prove it. I know personally that things became more violent. There was a big increase in tension because I know that civil rights marches were out of control, marches didn't listen to the leaders they just took things into their own hands. I think that the fact NICRA made a programme contributed to the increase of tension in Northern Ireland. This was a result of the Londonderry march. I fell that people might have been joining for violence this suggests that people didn't care about rights they just wanted to fight and cause more trouble than was needed. These sources prove that the civil rights were escalating out of control of the leaders. They also prove in a few of them that people enjoyed the violent part of the marches not for their rights. ...read more.