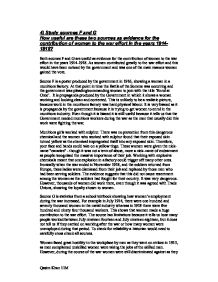 Both sources F and G are useful as evidence for the contribution of women to the war effort in the years 1914-1918. As women contributed greatly to the war effort and this would have been noticed by the government and was one of the main reasons women gai

it does not tell us if they carried on working after the war or how many women were unemployed during that period. To check for reliability a historian would need to carefully cross check all sources. Women faced great hostility in the workplace by men as they went on strikes in 1915, as men complained unskilled women were taking the jobs of the skilled men. However, during the course of the war women were still discriminated against as they would not get paid as much as men doing the same work. This would have been the government's way of keeping women down in their place, there was also a so called agreement made with the Trade Union that women would be sacked after the war. However, introduced conscription as the Military Service Acts were passed, by the end of the War 3.5 million men had been conscripted, as more women were recruited. These figures show that the women were much needed; in an attempt to be successful, showing their contribution to the war effort was vital. This would have been a morale victory to the women. ...read more.

'What would be the good of a vote without a country to vote in!' as the women had realised they had to help there country first and worry about the vote after. Overall, War lead to real changes in social attitudes as it gave women more freedom with clothing and hairstyles began to change. Millicent Fawcett made a speech to NUWSS at the beginning of the war.: Women your country needs you... let us show ourselves worthy of citizenship, whether our claim to it be recognised or not. This was another example of women putting there country first before the vote. On the other hand, Selina Cooper member of the Clitheroe Suffrage Society had to say: 'The women of all these countries have not been consulted as to whether they would have war or not'. But all the work done by women during the war was to lead to something the Suffragettes had wanted but failed to get. In 1918, women over the age of 30 were given the right to vote and in 1928, this was changed so that all women had equal political rights with men. Qasim Khan 11M ...read more.