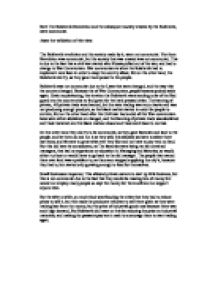 order for people to survive, But on the other hand after the Civil war had ended all the War communism laws were either abolished or changed, and the Banning of private trade was abolished and trade restarted and the black marked closed and trade went back to normal. On the other hand they did try to be communist, as they gave factories and land to the people, and let them do and run it as they will, this allowed workers to select there own boss, and farmers to grow what ever they like and not have to pay rend on land. ...read more.

Small businesses reopened, This allowed private owners to start up little business, but this is not communist due to the fact that they would be making lots of money but would not employ many people so kept the money for them self and not support anyone else. But the after a while, so much food was flooding the cities that they had to reduce prices to sell it, but this made the producers reluctant to sell there grain as they were making less from the money, but the price of industrial goods rose because there was such high demand, But Bolshevik did react on this by reducing the price on industrial materials, and making the peasants pay tax in cash to encourage them to start trading again. ...read more.

This is an accurate response but it is lacking in detail. The author could have strengthened it considerably by noting dates and the official names of policies like the NEP and Land Decree and by being clearer about what a communist state would look like in the introduction. 3 out of 5 stars.