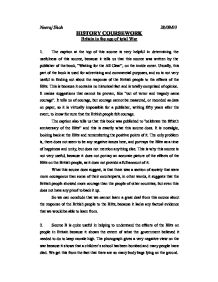 Britain in the age of total War - source related study

Neeraj Shah 28/09/03 HISTORY COURSEWORK Britain in the age of total War 1. The caption at the top of this source is very helpful in determining the usefulness of this source, because it tells us that this source was written by the publisher of the book, "Waiting for the All Clear", on the inside cover. Usually, this part of the book is used for advertising and commercial purposes, and so is not very useful in finding out about the response of the British people to the effects of the Blitz. This is because it contains no historical fact and is totally comprised of opinion. It makes suggestions that cannot be proven, like "out of terror and tragedy came courage". It tells us of courage, but courage cannot be measured, or recorded as data on paper, so it is virtually impossible for a publisher, writing fifty years after the event, to know for sure that the British people felt courage. The caption also tells us that this book was published to "celebrate the fiftieth anniversary of the Blitz" and this is exactly what this source does. It is nostalgic, looking back at the Blitz and remembering the positive points of it. The only problem is, there does not seem to be any negative issues here, and portrays the Blitz as a time of happiness and unity, but does not mention anything else. This is why this source is not very useful, because it does not portray an accurate picture of the effects of the Blitz on the British people, as it does not provide a full account of it. What this source does suggest, is that there was a section of society that were more courageous than some of their counterparts, in other words, it suggests that the British people showed more courage than the people of other countries, but even this does not have any proof to back it up. ...read more.

This meant that defences against the night raids were very poor, but what annoyed the people more was the fact that they could not feel safe at all, because there were not enough shelters for everyone. Knowledge of the fact that they could be killed at any moment will surely have upset the people, and severely affected morale. We are told in Source E, that as an alternative to shelters, people started going to "Euston and Paddington" which are underground train stations, where they felt they would be safe. The government had outlawed this because it was very dangerous when the lines were still active, but the people ignored the government, which again shows how people had begun taking the law into their own hands and had lost respect for the government, a justifiable reason to be concerned. There must have been a reason for this sudden loss in respect for the government, and it seems that it was due to a sudden loss in morale of the British people due to the direct consequences of the bombing, which were upsetting and frightening the people. The main problem the government faced was the fact that they were not ready to defend against the different types of bombs and they did not know what to expect. Each type of bomb had a different effect, which meant that the public could not relax and stayed worried and eventually, as we see in Source G, it led to "flights of entire communities into the countryside, or 'trekking' as it was called". If the people were worried and frightened, they were upset, and if they were upset, then morale would drop. This is why the government were very concerned in the autumn of 1940. What also left people very upset was that the government had not prepared for the amount of homelessness, and when there are incidents like Clydebank, where twelve thousand homes were destroyed, it is obvious that morale would drop, as people would not be happy without homes to live in. ...read more.

sources is that Source A is a commemorative and celebratory extract and therefore would omit any negative comments and we have no proof that the people in Source C have not been told to stand like that; merely a piece of morale-boosting propaganda set up by the government, and therefore these two sources are very unreliable and cannot be used. I think that to fully agree or fully disagree with the statement that the British faced the blitz with courage and unity is a myth is not correct as both are very extreme views, and what would be correct is to say that they did not face it with cowardice and disunity, but also that it was not a time where everyone held hands and took the Blitz with smiling faces. A man from Swansea's comments reflects this and shows what the true picture was like. He said, "People were marvellous - they can take it all right. But not like the bloke said on the wireless - they don't go about smiling about it - the people who have lost friends and relatives. They don't go about grinning." Also there was a sense of grim determination amongst the people. They were saying things like "we shall get used to it". This suggests that they were not enjoying it but that they were dealing with it. I believe that the people felt that the Blitz wasn't a bed of roses, but they did keep on going. This is illustrated in Source G where it tells us that although the people were frightened so much that they used to 'trek' to the countryside every night, they still came to work every morning. This shows that they were frightened, but they were also trying their best and acting very brave. So, no I do not agree with this statement, but I also do not disagree because there is a lot of evidence to suggest that even though the people were frightened, they still kept on going. ...read more.