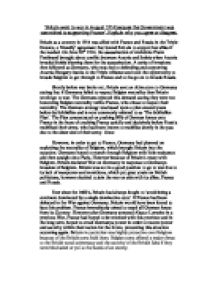 Britain went to war in August 1914 because the Government was committed to supporting France. Explain why you agree or disagree

‘Britain went to war in August 1914 because the Government was committed to supporting France’. Explain why you agree or disagree.

Britain as a country in 1914 was allied with France and Russia in the Triple Entente, a ‘friendly’ agreement that bound Britain to support her allies if the needed. On June 28th 1914, the assassination of Archduke Franz Ferdinand brought about conflict between Austria and Serbia when Austria invaded Serbia blaming them for the assassination. A series of invasions then followed as Germany, who was tied to defending and supporting Austria-Hungary thanks to the Triple Alliance and took the opportunity to invade Belgium to get through to France and to the go on to invade Russia.

Shortly before war broke out, Britain sent an ultimatum to Germany stating that if Germany failed to respect Belgian neutrality then Britain would go to war. The Germans rejected this demand stating they were not honouring Belgian neutrality unlike France, who chose to respect their neutrality. The German strategy was based upon a plan created years before by Schlieffen and is now commonly referred to as ‘The Schlieffen Plan’. The Plan concentrated on pushing 90% of German forces onto France in the hope of crushing France quickly and decisively before Russia mobilised their army, who had been known to mobilise slowly in the past due to the sheer size of their army. Once

However, in order to get to France, Germany had planned on exploiting the neutrality of Belgium, which brought Britain into the equation. Germany hoped to march through Belgium with little resistance and then straight onto Paris. However because of Britain’s treaty with Belgium, Britain declared War on Germany in response to Germanys invasion of Belgium. Britain was not in a good position to go to war due to its lack of manpower and munitions, which put great strain on British politicians, however decided to join the war on side with its allies, France and Russia.

Ever since the 1600’s, Britain had always fought to ‘avoid being a continent dominated by a single dominative state’. If France had been defeated in the War against Germany, Britain would have been forced to face this problem. France immediately aimed to expel all German forces from its Country. However after Germany annexed Alsace Lorraine in a previous War, France had hoped to be reunited with this province and in the long term, hoped to crush Germanys power in order to restore power and security within their nation for the future, preventing this situation occurring again. Britain in particular was highly protective over Belgium because of the British ports held there. Belgian ports offered a major threat to the British naval supremacy and the security of the British Isles if they were blockaded or put at the hands of an enemy.

In conclusion, I believe that Britain had no option whether to go to war or not. If Germany had won the war, Britain’s security would have been at a great threat because of how the German army had grown previous to its invasions on France and Belgium. Although Britain was committed to supporting France because of The Triple Alliance, if Britain had chose to neglect this role of support, Britain would have been at real threat from Germany especially because of the German invasion of Belgium. I believe that the British Government would have chosen to commit and support France, however it was not the only factor Britain would have taken into consideration. Once Belgium had been invaded by Germany, Britain needed to fight back in order to protect its naval supremacy and if Germany had won over France, it would of brought many more threats to Britain as a country.