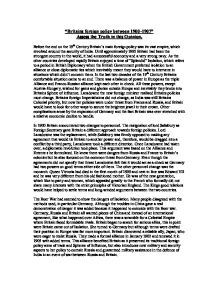 &quot;Britains foreign policy changed between 1900-1907&quot; - Assess the Truth in this Opinion.

"Britains foreign policy between 1900-1907" Assess the Truth in this Opinion. Before the end on the 19th Century Britain's main foreign policy was its vast empire, which revolved around the security of India. Until approximately 1895 Britain had been the strongest country in the world, it had a successful economy and a very strong navy. As the other countries developed rapidly Britain enjoyed a time of "Splendid" Isolation, which refers to a period in British Diplomacy when the British Government preferred isolation to an alliance or close diplomatic ties which inevitably meant they would have to intervene in situations which didn't concern them. In the last two decades of the 19th Century Britains comfortable situation came to an end. There was a balance of power in Europe as the triple Alliance and Franco-Russian alliance kept each other in check. All these powers, except Austria-Hungary, wished for gains and glories outside Europe and inevitably they broke into Britains Sphere of influence. Lansdowne the new foreign minister realised Britains policies must change. Britains foreign Imperial aims did not change, as India was still Britains Colonial priority, but now her policies were under threat from France and Russia, and Britain would have to look for other ways to secure the brightest jewel in their crown. ...read more.

He was of the new generation, which like to party and women, which appealed greatly to the French who formally did not share many interests with the strict principles of Victorian England. The Kings good relations would have helped to settle terms and long-winded arguments between the two countries. The Boer War had seemed to show the dangers of Isolation. Many people disagreed with the methods used, in particular Germany. Although the troubles in China gave a real demonstration of danger it was added because it happened to coincide with the Boer war. Germany, Russia and Britain all wanted pieces of China and instead of an international agreement, like what happened over Africa, there was a scramble for a Celestial Empire where Britain faced formidable rivals. Britain began to search for serious allies, this is point were Britain came out of Isolation. She turned to Germany but although terms were drafted their position in Europe was far more important. Britain discovered a reliable ally, Japan, who were eager to resist Russia. They made a formal alliance in January 1902 and renewed it in 1905 with added terms. ...read more.

Britain and Russia have never been close because of arguments over Constantinople and naval rivalry After Britain had secured their path way to India via Egypt they didn't have a problem with Russian action in the Turkish area. The Anglo - Russian Entente was signed in 1907. This agreement was based on Imperial success and would help security in Europe. Half of Britains army was based on the Indian borders, so with Anglo-Russian co-operation, those troops could be deployed into Europe. In Conclusion, the statement "Britain's foreign policy changed between 1900-1907" is essentially true but only to a certain extent. Britain's foreign policy grew. They still employed the same Imperial foreign policies but due to complications to retain their colonies they needed assistance from others. With the threat of Germany, as well, Britain needed to be secure. Under Kaiser Wilhelm II the German navy expanded rapidly and this made Britain anxious about the security of her island. Britain has a very small army and if their navy was matched there could be serious consequences. The thought of invasion encouraged the government to take measure to neutralise the threat by forming closer ties with other powers but Lansdowne figured he could protect Britains Empire at the same time. ...read more.