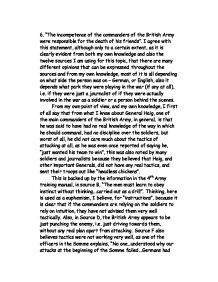 6. “The incompetence of the commanders of the British Army were responsible for the death of his friends”. I agree with this statement, although only to a certain extent, as it is clearly evident from both my own knowledge and also the twelve sources I am using for this topic, that there are many different opinions that can be expressed throughout the sources and from my own knowledge, most of it is all depending on what side the person was on – German, or English, also it depends what park they were playing in the war (if any at all), i.e. if they were just a journalist of if they were actually involved in the war as a soldier or a person behind the scenes.

From my own point of view, and my own knowledge, I first of all say that from what I know about General Haig, one of the main commanders of the British Army, in general, is that he was said to have had no real knowledge of the way in which he should command, had no discipline over the soldiers, but worst of all, he did not care much about the tactics of attacking at all, as he was even once reported of saying he, “just wanted his team to win”, this was also noted by many soldiers and journalists because they believed that Haig, and other important Generals, did not have any real tactics, and sent their troops out like “headless chickens”.

This is backed up by the information in the 4th Army training manual, in source B, “The men must learn to obey instinct without thinking...carried out as a drill”. Thinking, here is used as a euphemism, I believe, for “instructions”, because it is clear that if the commanders are relying on the soldiers to rely on intuition, they have not advised them very well tactically. Also, in Source D, the British Army appears to be just punching the enemy, i.e. just driving towards them, without any real plan apart from attacking. Source F also believes tactics were not working very well, as one of the officers in the Somme explains, “No one…understood why our attacks at the beginning of the Somme failed…Germans had camouflaged guns.” This, I think, is used as an excuse, a way to say that the Germans had been “cheating” by using equipment which they could not use. This was also from a very good officer, so you expect that those other officers below his quality would have even less of an idea with the tactics. Source I also says “French positions,,,were so much batter than ours”, so maybe the officers should have started with the simple tactics i.e. positioning. Also source L definitely agrees with this, when Lt John Raws says, “…I honestly believe that Goldy and the other officers were murdered through the incompetence…of those in high authority.” So not only the soldiers, but also some of the other Lieutenants disagreed with the dangerous tactics which could end up in the soldiers getting injured or even killed.

However, one could argue that it was not the fault of the officers alone, as in source H it describes that maybe the officers weren’t given enough artillery and equipment to attack well.

In conclusion, I think that I agree with the idea that the incompetence of the commander of the British Army were responsible for the deaths of his friends, as the evidence in the sources and from my own knowledge shows that not only the soldiers, but the officers also, knew that the tactics of the officers were not working.