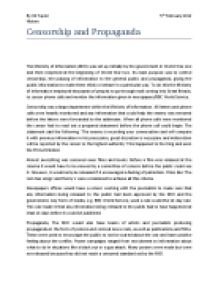 British Censorship and Propaganda During WW2

Newspapers offices would have a censor working with the journalists to make sure that any information being released to the public had been approved by the MOI and the government. Any form of media, e.g. BBC World Service, used a rule could the 14 day rule. This rule made it that any information being released to the public had to have happened at least 14 days before it could be published. Propaganda, The MOI would also have teams of artists and journalists producing propaganda in the form of posters and comical news reels, as well as publications and films. These were used to encourage the public to not be scared about the war and have positive feeling about the conflict. Poster campaigns ranged from recruitment to information about what to do in situations like a black out or a gas attack. ...read more.

They were designed to inform anybody what to do in certain situations. These were usually comical and would be very light hearted, yet have an underlining message that would raise moral amongst the public. The radio, which was the only mass media around at the time was used to ensure that the public were aware of information about the war. This was, as well as being a public entertainment platform, a highly censored and used as a means to put across ideas and propaganda. In all the Ministry if Information played a huge role in keeping public morale to a high standard during the long years of the war, publishing enough information to inform yet keep Britain?s secrets from German eyes and ears. This was a large success for Britain as propaganda kept British people positive so that they wouldn?t lose faith in the government. Sources: 1. Wikipedia ? Ministry of Information 2. Supplied information sheet 3. BBC History www.BBC.co.uk/history/ ...read more.