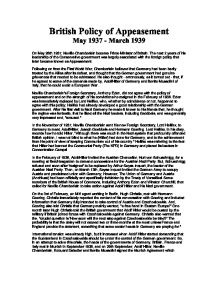 British Policy of Appeasement May 1937 - March 1939 On May 28th 1937, Neville Chamberlain became Prime Minister of Britain. The next 2 years of his leadership of the Conservative government was largely associated with the foreign policy that later became known as Appeasement. Following on from the First World War, Chamberlain believed that Germany had been badly treated by the Allies after its defeat, and thought that the German government had genuine grievances that needed to be addressed. He also thought - erroneously, as it turned out - that, if he agreed to some of the demands made by, AdolfHitler of Germany and Benito Mussolini of Italy, that he could avoid a European War. Neville Chamberlain's Foreign Secretary, Anthony Eden, did not agree with the policy of appeasement and on the strength of his convictions he resigned in the February of 1938. Eden was immediately replaced by Lord Halifax, who, whether by coincidence or not, happened to agree with this policy; Halifax had already developed a good relationship with the German government. After his first visit to Nazi Germany he made it known to his friends that, he thought the regime was fantastic, that he liked all the Nazi leaders, including Geobbels, and was generally very impressed and, "amused." In the November of 1937, Neville Chamberlain sent his new Foreign Secretary, Lord Halifax, to Germany to meet, AdolfHitler, Joseph Goebbels and Hermann Goering. Lord Halifax, in his diary, records how he told Hitler, "Although there was much in the Nazi system that profoundly offended British opinion, I was not blind to what he (Hitler) had done for Germany, and to the achievement from his point of view of keeping Communism out of his country." Halifax was referring to the fact that Hitler had banned the Communist Party (The KPD) in Germany and placed its leaders in Concentration Camps! In the February of 1938, AdolfHitler invited the Austrian Chancellor, Hurt von Schuschnigg, for a meeting at Berchtesgarden to demand concessions for the Austrian Nazi Party. ...read more.

But what did everyone think to this aggressive move? Especially after Hitler had declared he 'did not want anything else' at the aforementioned meeting with Churchill in Munich! The League of Nations figured that as he had a good chunk of Czechoslovakia, why not let him have it all? Therefore, Hitler remained untried in battle, and had already tripled the size of his fascist empire. Later, in August of 1939, the League of Nations became worried. The sudden reason for worry was that Stalin and Hitler made a pact not to fight each other, known as the Nazi-Soviet Pact. They also agreed to invade Poland, splitting it right down the middle. When learning this, the League of Nations, primarily Britain and France, decided they would defend Poland if invaded! On September 1st 1939, Germany and Russia invaded Poland. Within a month Poland was conquered and in ruins, and Britain and France declared war on Germany, and it was about time Great Britain and France took action. At that point, Germany was almost half of Europe, and steadily increasing. If they had appeased any longer, there may well be no Europe today, just Germany. As it is evident, the Policy of Appeasement directly caused W.W.II.! * The Von Schlieffen Plan Count Alfred von Schleiffen, who became Chief of the Great General Staff in 1891, submitted his plan in 1905; it was adopted, slightly modified, in 1914. All writers have been in accord that Moltke made the left or defensive wing in Alsace and Lorraine stronger than Schlieffendesigned, and that he did so at the expense of the right wing, the decisive one, which in swinging round was to sweep the French Armies against the back of their eastern frontier fortresses and against the Swiss frontier. According to General Groener in Das Testament des Grafen Schlieffen, the deployment of the troops against France in the 1905 plan and in 1914 were, omitting Landwehr and Ersatz troops, for sieges and L. ...read more.

But was it truly a failure? The truth is that the Maginot Line served the exact purpose for which it was built. It dissuaded the Germans from attacking across France's eastern frontier; it gave the French Army time to fully mobilise and deploy; and, if properly used, it could have made up for France's anticipated manpower shortage. The greatest defect of the line itself was that it was too short. In May 1940 Hitler simply chose to ignore it. The Maginot Line did not fail France, but the "Maginot mentality" did cause her defeat, as did the refusal of her leaders to acknowledge the coming of modern warfare, mobile battles that would be fought with tanks and aircraft. Thus, while France built a modern version of the First World War's Hindenburg Line, Hitler built Panzers and Stuka dive bombers. In May 1940, Hitler attacked through the "impenetrable" Ardennes Forest in neutral Belgium. By mid-June, the Wehrmacht had completely surrounded the French army in Alsace, yet, only one Maginot fort, Villy la Fert�, had fallen and the line was still intact, and still lethal. Many fortress commanders wanted to hold out in a fortified redoubt, but the French army's impotent leadership, led by Maxime Weygand, called for an armistice. Some of the forts fought on, but by the end of June it was over and the proud fortress garrisons marched into captivity. The Allies fought through a small portion of the line around Metz in the fall of 1944 and in northern Alsace in December. After the war ended, the line was manned once again by the French army. Several of the forts were modernised throughout the 50s and 60s, but when De Gaulle pulled France out of NATO, all but a few forts were abandoned. France subsequently relied on her nuclear forces for protection. In the 1970s, many of the Maginot Line forts and casements were auctioned off to the public. Some were used for mushroom farming, a handful opened for tourists, and the rest lapsed into decay and disappeared into the French countryside. ...read more.