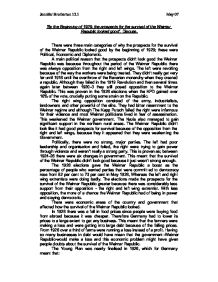 'By the Beginning of 1929, the prospects for the survival of the Weimar Republic looked good'. Discuss.

'By the Beginning of 1929, the prospects for the survival of the Weimar Republic looked good'. Discuss. There were three main categories of why the prospects for the survival of the Weimar Republic looked good by the beginning of 1929; these were Political, Economic and Diplomatic. A main political reason that the prospects didn't look good the Weimar Republic was because throughout the period of the Weimar Republic there was always opposition from the right and left wings. The left were revolting because of the way the workers were being treated. They didn't really get very far until 1918 until the overthrow of the Bavarian monarchy when they created a republic. Although they failed in the 1919 Revolution and then several times again later between 1920-3 they still posed opposition to the Weimar Republic. This was proven in the 1928 elections when the KPD gained over 10% of the vote, crucially putting some strain on the Republic. The right wing opposition consisted of the army, industrialists, landowners and other powerful of the elite. They had bitter resentment to the Weimar regime and although The Kapp Putsch failed the right were infamous for their violence and most Weimar politicians lived in fear of assassination. ...read more.

The Young Plan was nearly finalised in 1928, which for Germany meant that: * The sum for reparations was reduced to 37,000 million from 132,00 million by the Dawes Plan. * Their annual payments were also reduced to lower than they were for the Dawes Plan (1,000 million marks a years) * The allies that were originally maintaining control of railways, the Reichsbank and custom duties, were discontinues. * This was the final settlement and Germany took part in the reparations negotiations for the first time. This gave Germany the responsibility it needed and because now their inflation was being cured and it was down to the Weimar Republic that this occurred, the prospects looked good for the survival of the Government. More money was entering the country through loans than was going out through reparations. This gave the country a boost in their social expenditure as well as their industrial expansion. They could earn more money independently instead of relying on foreign loans. This led to their economy recovering and by 1927 their overall industrial production had recovered to 1913 levels, which was what it was like before the First World War. Using the Young Plan gave Germany until 1988 to complete paying the reparations fine back. ...read more.

When Germany joined the League of Nations in 1926 it strengthened their prospects because the Weimar Republic and Stresemann were able to put forward their ideas for changes in the Reparations fine. This plan worked and Germany ended up paying a small percentage of what they originally were going to. In Conclusion to this, the Weimar Republic's prospects for survival looked good by the beginning of 1929. The main reasons for this being that the economy was recovering efficiently and although the Wall Street Crash might alter this they still had Russia to rely on. They had more money entering than leaving in loans so their finances were improving. Having the economy recovering meant that the Government could turn their attention to more pressing issues like opposition which, although had decreased because more people wanted a democratic government, was still a threat to them. Their government also seemed to be well established and when Hindenburg was elected as the German president in 1925 it reassured a lot of Germans that their welfare would be taken into consideration. By the beginning of 1929 the prospects for the survival of the Weimar Republic looked good and if depression hadn't got in the way in 1930 it would have survived. Jennifer Brotherton 12.1 May 07 ...read more.