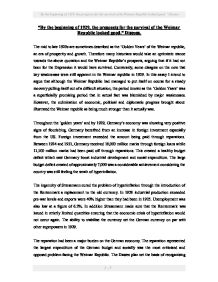 &quot;By the beginning of 1929, the prospects for the survival of the WeimarRepublic looked good.&quot; Discuss.

"By the beginning of 1929, the prospects for the survival of the Weimar Republic looked good." Discuss. The mid to late 1920s are sometimes described as the 'Golden Years' of the Weimar republic, an era of prosperity and growth. Therefore many historians would take an optimistic stance towards the above quotation and the Weimar Republic's prospects, arguing that if it had not been for the Depression it would have survived. Conversely, some disagree on the note that key weaknesses were still apparent in the Weimar republic in 1929. In this essay I intend to argue that although the Weimar Republic had managed to put itself on course for a steady recovery pulling itself out of a difficult situation, the period known as the 'Golden Years' was a superficially promising period that in actual fact was blemished by major weaknesses. However, the culmination of economic, political and diplomatic progress brought about illustrated the Weimar republic as being much stronger than it actually was. Throughout the 'golden years' and by 1929, Germany's economy was showing very positive signs of flourishing. Germany benefited from an increase in foreign investment especially from the US. Foreign investment exceeded the amount being paid through reparations. ...read more.

As the surface of the economy begins to crack, it is quite apparent that there were glitches and problems that would considerably affect the stability and the prospects of survival for the Weimar republic. The Weimar republic's political outlook looked very stable and there no signs of instability on the surface. There was great reason for optimism about in 1929. The Weimar government began to look quite popular as growing support for the government began to mount and support for the extremist left and right wing began to diminish. In 1928 the elections saw the left and right wing lose ground, as pro-Weimar political parties gained votes from 52%in 1924 to 73% in May 1928. There were no further attempts to overthrow the government by Putsch or revolution after 1923. The constitution seemed to provide the civil liberties and freedoms that everyone craved all significant to the success of the Weimar republic. Moreover, the election of Hindenburg as President in 1925 reassured many conservatives that the republic might protect their interests. Thus this meant that previous opposition from the mittlestand would disappear as they would favour Hindenburg's presidency and he would not be able to abuse his power to consolidate his elitist sympathies. ...read more.

The experiences of the period 1924-29 were unequal and unpredictable. Although life was in many ways better than it had been than under the shadow of hyperinflation (1923) not everyone prospered in the same way. Many, including the farmers and the Mittlestand found the situation so dire and disastrous that it affected their contentment with democracy, Weimar and their voting behaviour. It encouraged normal average Germans to cast their vote for the extremist parties, which had the answers to explain away their problems - invariably the Jews, the Republic, Versailles and the 'Stab in the Back'. Overall the German economy did improve in the period 1924-29, but this recovery was fragile and flawed. It is not enough to suggest that external forces alone wrecked a thriving system - it must be questioned really whether there was ever a thriving system. Stresemann described the situation as 'Borrowed Prosperity'. I believe that the numerous problems and the instability that WWI had brought about had not been overcome and the underlying problems remained, meaning the prospects for the survival of the Weimar Republic rested on uncertain foundations. Reference 1 - S. Lee, 1998 2 - Gustav Stresemann, 1928 3 - S. Green 2003 "How Secure was the Weimar Recovery" "By the beginning of 1929, the prospects for the survival of the Weimar Republic looked good." Discuss. 1 - 5 ...read more.