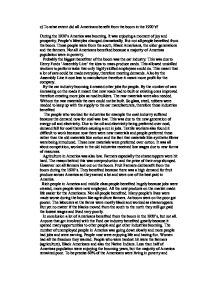 c) To what extent did all Americans benefit from the boom in the 1920's?

c) To what extent did all Americans benefit from the boom in the 1920's? During the 1920's America was booming. It was enjoying a moment of joy and prosperity. People's lifestyles changed dramatically. But not all people benefited from the boom. These people were from the south, Black Americans, the older generations and the farmers. Not all Americans benefited because a majority of Americas population were in poverty. Probably the biggest benefitter of the boom was the car industry. This was due to Henry Fords 'Assembly Line' the idea to mass-produce cards. This allowed unskilled workers to perform tasks that only highly skilled employees could do. This meant that a lot of cars could be made everyday, therefore meeting demands. ...read more.

Textile workers also found it difficult to work because now there were new materials and people preferred these rather than the old materials like cotton and the fact that materials like synthetic fibres were being introduced. These new materials were preferred over cotton. It was all about competition, workers in the old industries received low wages due to new forms of resources. Agriculture in America was also low. Farmers especially the sharecroppers were hit hard. The reason behind this was overproduction and the price of their crop slumped. However not all farmers lost out on the boom. Fruit Farmers did benefit from the boom during the 1920's. They benefited because there was a high demand for fruit produce across America so they earned a lot and were one of the best paid in America. ...read more.

People now were enjoying life and having fun. Women had all the freedom they wanted. People who were hardest hit were the farmers (agriculture), Black Americans and also the Native Indians. Less than half of Americas population were enjoying the booming years, but the majority of America remained poor. To be precise 60% of the Americans were living in poverty and remained in poverty regardless of the economic boom. The people who were suffering from poverty in America suffered a great deal. Blacks, ship builders, coal miners, textile workers were affected greatly. These people made up 60% of Americas population and they were in poverty. In comparison to the rich 40% of Americans population such people in: new industries, car industries, businesses, electrical. These people benefited due to the high wages and could afford to buy the new products on the market. ?? ?? ?? ?? ...read more.