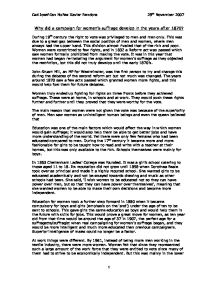 Why did a campaign for women's suffrage develop in the years after 1870? During 19th century the right to vote was privileged to men and men only. This was due to a great gap between the social position of men and women, where men always had the upper hand. This division almost rivalled that of the rich and poor. Women were constricted to few rights, and in 1832 a Reform act was passed which saw women formally prohibited from making the vote. It was in this year that women had began re-instating the argument for women's suffrage as they objected the restriction, but this did not truly develop until the early 1870's. John Stuart Mill, an MP for Westminster, was the first person to try and change this during the debates of the second reform act but not much was changed. The years around 1870 saw a few acts passed which granted women more rights, and this would help fuel them for future debates. Women truly ended up fighting for rights on three fronts before they achieved suffrage. These were at home, in schools and at work. They would push these rights further and further until they proved that they were worthy for the vote. The main reason that women were not given the vote was because of the superiority of men. ...read more.

The first vote achieved came in 1894 when a law was passed which saw women given the vote in municipal council elections. This made women 15% of the electorate, although it left out married women. But the campaign had only just begun. . Describe the ways in which the methods of the suffragists and the suffragettes were different. Now that more and more women were beginning to express there feelings about women's right to vote, groups began to form which would help them to publicise the suffrage movement. The two main groups consisted of the NUWSS (National Union of Women's Suffrage Societies) and the WSPU (Women's Social and Political Union). These two groups had both been in partnership until 1903, when they suffered a split. This segregated the two groups into two categories: The Suffragists (NUWSS) and the Suffragettes (WSPU). Both these groups of course fought for the same cause of women's suffrage, yet they used different tactics. The Suffragists started the campaign and used non-violent means of protest. They were led by Mrs. Millicent Fawcett who believed in moderate, peaceful persuasion, and constitutional methods. The Suffragettes were the opposite type of campaigners to the Suffragists. They did not believe in the actions of the Suffragists and felt that the only way to get the governments attentions truly were to take on militant tactics. ...read more.

In France millions of women worked to help their country going just as much as the women in Britain, but they did not get the vote. This was most probably because the women of France had not committed themselves to any pre-war suffrage movements. The people of France had not experienced the violence of the suffragists or the constant protests of many women. But the British had. It is argued that after the war the British did not want to return to the violence of pre-1914 and that the vote was given to them to try and stop it from happening once more. The British did not know where continued intense campaigns would take the country, and they did not want to risk further turmoil especially after the experiences of war. So they gave the vote to women over 30 to try and ease the pressure, which could have come. Many MP's felt that it was inevitable that some sort of reform was going to be passed. Passing the act would mean that any further change, like full equality, could be delayed further but the suffragettes would still be happy. Many even thought that full equality could therefore be left alone for another 30 years. Women earned an equal vote 10 years later in 1928. ?? ?? ?? ?? Carl Josef-Ian Nu�ez Xavier Rendora 28th November 2007 1 ...read more.