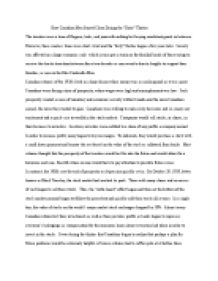 ﻿How Canadian Men Stayed Clean During the ?Dirty? Thirties The twenties were a time of flappers, bobs, and jazz with nothing but buying exorbitant goods in between. However, these careless times were short- lived and the ?dirty? thirties began a few years later. Society was affected on a large economic scale which in turn put a strain on the familial bonds of those trying to survive the drastic transition between these two decades as men went to drastic lengths to support their families, as seen in the film Cinderella Man. Canadian citizens of the 1920s lived in a hazy dream where money was as easily gained as it was spent. Canadians were facing a time of prosperity, where wages were high and unemployment was low. Such prosperity created a sense of monetary and economic security within Canada and the more Canadians earned, the more they wanted to gain. ...read more.

As a result of the drastic shift in wealth, citizens of the thirties became increasingly desperate and were willing to do do laborious and tedious work for a mere $0.20 at most in contrast to the relaxing and languid investments that brought quick wealth in the twenties. During 1933, Canada?s unemployment rate was nearly 30%- not including farmers and fishermen. Meaning, if a man was able to find a job he was extremely lucky and was very unlikely to be given the same chance the next day. Thus, very few had the good fortune to turn down any form of work as physically draining as it was. To illustrate, in Cinderella Man, James Braddock pushes himself beyond physical weaknesses to work at a dock where work is laborious and almost unbearable. He is willing to suffer the pain of a broken hand and gain a limited amount of pay simply because the docks were his only method of obtaining decent pay- after his loss of a boxing license. ...read more.

Over 200 000 men lived in these camps during 1933 and faced a life similar to that of prison. The only benefit was that at lest a few cents were made each day- a small but necessary sum of money in the face of the Depression. However, Canadian men soon protested the terrible conditions in the relief camps. The chaotic riots and protests directed towards Canada?s government, such as the Regina riot and On-to-Ottawa Trek, led R.B. Bennett to create the ?New Deal? which established minimum wages and unemployment insurance among other policies which resulted in a small victory for future Canadians who would face Depression as the business cycle continued its circulation. In conclusion, the lives of Canadians differed drastically as the carefree times of the twenties abruptly ended- plummeting Canada into a Depression within a matter of days. The men of the time had been terribly effected and the carefree dream of the twenties had left Canadians bitter and cautious after the reality of the thirties touched them. ...read more.