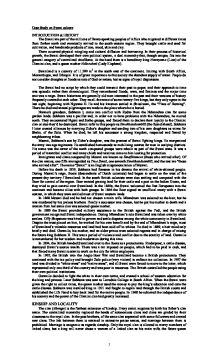 Case Study on Swazi culture INTRODUCTION & HISTORY The Swazi are part of the millions of Bantu-speaking peoples of Africa who migrated at different times from farther north and eventually arrived to the south-eastern region. They brought cattle and seed for cultivation, and handmade products of iron, wood, skin and clay. There occurred physical mingling and cultural diffusion and borrowing. In their process of historical growth, the Swazi developed their own political system, a dual monarchy that, though unique, fits into the general category of centralized chiefdoms. At the head there is a hereditary king Nwenyama (Lion) of the Dlamini clan, and a queen mother Ndlovukazi (Lady Elephant). Swaziland is a country of 11.200 m2 at the south east of the continent, limiting with South Africa, Mozambique, and Ethiopia. It is of great importance to this society the abundant supply of water. People do not consider droughts or floods as acts of God or nature, but as signs of royal displeasure. The Swazi had no script by which they could transmit their past to paper, and their approach to time was episodic rather than chronological. They remembered floods, wars, and famines and the major time unit was a reign. Swazi historians are generally old men interested in the past and their versions of history frequently contradict each other. They recall the name of some twenty-five kings, but they only agree in the last eight, beginning with Ngwane II. He and his kinsmen settled in Shiselweni, the "Place of Burning". There he died and annual pilgrimages are made to the place where he is buried. Nwane's grandson, Sobhuza I, came into conflict with Zudze from the Ndwandwe clan for some garden lands. Sobhuza was a pacifist and, in order not to have problems with the Ndwandwe, he moved north. They encountered Nguni and Sotho groups, and forced them to declare their loyalty to the Dlamini clan or else they'd be destroyed. ...read more.

will share among the occupants. The king must awaken his father's royal homesteads, and inaugurate new places of his own. He perpetuates the old homesteads by sending some of his wives to live there and one of his sons will become the chief prince of the area. Swazi marriage is essentially a linking of two families more than of two persons. This marriage is consummated with the bearing of children. Swazi marriage is of enduring nature, as seen with the application of the levirate. When a man dies, his wife shall be inherited by one of the male relatives to bear children in his name. The woman main role is the bearing of children; if she cannot bear any children, her family must either return the lobola or provide her with a relative as junior co-wife, to bear children to "put into her womb". High lobola is a symbol of the permanence of marriage, and divorce is rare in Swazi society. The amount of lobola depends on the women status, and if she is chosen to be a king's main wife, many headmen will probably contribute to the paying of the lobola. This issue is controversial in modern Africa, as it is condemned as the buying and selling of women, but its permanence has led to a deeper sociological level. The woman is a valued member of the community and the transaction symbolizes her past status and her future security. By lobola, her children are made legitimate and acquire the benefits of their father's lineage; and her family is compensated by the loss of her services. A first wife is never the main wife. This election may depend on pedigree, and a chief's daughter has advantage over any other. Other factor may be considered, such as marriage to a specific kin. In this case the most important is the one who has the clan name of the man's paternal or maternal grandmother. ...read more.

The relationship between a chief and his subjects is essentially personal. The term father extended from the family to the head of the homestead, and to the chief of the district, suggests authority and protection. He is expected to know all the families and share moments of social importance (death, wedding, birth) with his subjects. His power is paternalistic, not despotic. Swazi political authorities are criticized by their subjects if they are aggressive and domineering. They are constantly reminded that their prestige depends mainly on the number of his followers, and he is aware that his subjects have the right to migrate if they are not happy with his procedure. Freedom to move is a primary characteristic of the traditional Swazi citizen rights. WEALTH AND STATUS Accumulation of wealth is not noticeable in traditional society, where rulers and subjects live in the same type of home, eat the same kind of food, and use the same limited range of utensils. Generosity is the hallmark of achievement and the main virtue of buntfu (humanity). From infancy, children are taught not to be greedy and they, themselves, soon enforce the rule of sharing. The character of a headman is judged by his hospitality. A donor must always belittle his gift, while the recipient must exaggerate its importance and accept even the smallest gist in both hands. Begging carries no shame between Swazi, To beg is a sign of deference and to give is a token of superiority, enhancing status. The person who refuses a request should suffer, and what is given is a gift that shall not be returned. A person is thanked for a favor by a further request: "do the same tomorrow". There is a considerable restraint on ambition and ability, rich conservatives divide their homesteads, lend out their surplus cattle and hide their money in the ground, for they fear witchcraft. It is safer to plead poverty, than to boast of wealth. The major obvious disparity in wealth is not between traditional and "progressive", or between aristocrat and commoner, but between Whites and Swazi. 1 ...read more.