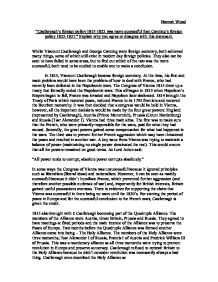 Hannah Wood "Castlereagh's foreign policy 1815-1822 was more successful than Canning's foreign policy 1822-1827." Explain why you agree or disagree with this statement. Whilst Viscount Castlereagh and George Canning were foreign secretary, both achieved many things, some of which still exist in modern day foreign policies. They also can be seen to have failed in some areas, but to find out which of the two was the more successful, both need to be studied to enable one to make a conclusion. In 1815, Viscount Castlereagh became foreign secretary. At the time, his first and main problem would have been the problem of how to deal with France, who had recently been defeated in the Napoleonic wars. The Congress of Vienna 1815 drew up a treaty that formally ended the Napoleonic wars. This all began in 1813 when Napoleon's Empire began to fall, France was invaded and Napoleon later abdicated. 1814 brought the Treaty of Paris which restored peace, reduced France to its 1792 frontiers and restored the Bourbon monarchy. It was then decided that a congress would be held in Vienna, however, all the important decisions would be made by the four great powers: England (represented by Castlereagh), Austria (Prince Metternich), Prussia (Count Hardenburg) and Russia (Tsar Alexander I). Vienna had three main aims. The first was to make sure that the French, who were primarily responsible for the wars, paid for what they had caused. Secondly, the great powers gained some compensation for what had happened in the wars. ...read more.

France by themselves and Russia by themselves, but a combination of the two would have been much too much for Britain to take on.) and to maintain a balance of power in Europe. The reason Britain was so interested in Russian expansion was because Britain had to travel through Turkey to reach India. India became known as 'The jewel in Britain's crown' as it had so many resources that Britain traded as Britain had very few of its own. Russia had no access to the sea for some months as its coastline froze for part of the year. Russia wanted control of the straits between Europe and Asia, which would give her access to the Mediterranean and thus aid the growing business of grain exports. This expansion worried Britain as it was easy to travel through Turkey to reach India as Turkey was weak. With this in mind, Britain decided to support Turkey against Russia. The principles of Castlereagh's State paper of May 1820 remained from 1815 to 1865 unaltered. This can only be seen as a success on the part of Castlereagh. However in some aspects, Castlereagh can be seen to have failed. The Congress system had a tension built into it - the fact that three great powers were autocratic where as Britain and only Britain was democratic, so from the very start there were going to be disagreements. Castlereagh was also poor at communicating with others and especially the public. ...read more.

But along with his successes, Canning failed in some areas too. Canning helped, through his policies, to develop Greek independence but this in the long run weakened Turkey and strengthened Russia - which was definitely not in Britain's interests. South American republics were not Canning's idea; he merely carried out what Castlereagh had started. Castlereagh had also set up a period of peace which Canning ended. This can also be said for South Americas independence as it said to have been Castlereagh to have started off this process. In conclusion I think that Castlereagh's foreign policy between 1815 and 1822 was more successful than Canning's foreign policy of 1822 to 1827 for a number of reasons. Castlereagh laid down principles whereas Canning appears to have simply carried out policies and made things worse by leaving Turkey weak and Russia strong. Castlereagh's policies were misunderstood whereas Caning took the time to explain to the public what he was trying to achieve. This gained him public support and popularity but appears to have cleverly turned everything into a publicity campaign, which from some peoples point of view may make him appear to be less serious and less of a politician. T may have made him look like he took the job less seriously than he should have and that he was more interested in public support than what he actually achieved, which is the opposite of the impression one gets of Castlereagh. A quote that supports this argument is: "There was no fundamental change of policy when Canning took over in 1822. Canning merely accelerated existing trends" (Britain, 1815-1951) ...read more.