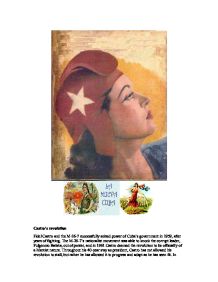 Castro's revolution Fidel Castro and the M-26-7 successfully seized power of Cuba's government in 1959, after years of fighting. The M-26-7's nationalist movement was able to knock the corrupt leader, Fulgencio Batista, out of power, and in 1961 Castro deemed the revolution to be officially of a Marxist nature. Throughout his 40-year stay as president, Castro has not allowed his revolution to stall, but rather he has allowed it to progress and adapt as he has seen fit. In relation with Castro's revolution in Cuba has been another revolution, that of the Cuban women. Castro himself described the changes in women's public and private lives as "a revolution within a revolution". In a true system of equality, as in the one Castro holds as his ideal, equality reaches all people across all lines whether they are lines of race, class, or gender. Throughout Castro's campaign, starting in 1953 with the failed Moncada attack, Castro has used historic referenciality to appeal to the Cuban population. Castro's most often mentioned historical figure is no other than the national hero, Jos� Mart�. While Mart�'s view on women is suspect to debate, his opinion on equality is very clear. Mart� once said, "Respect for the freedom and ideas of others, of even the most wretched being, is my fanaticism. When I die, or if I am killed, it will be because of that." The crux of this prophetic quote was borrowed by Castro on a broader level when he attained power and based his entire social structure on equality. Women in pre-revolutionary Cuba Gender differences were enormous in Cuba before the Cuban revolution. The prototypical woman of the old republic according to a leading journalist of the revolution, Mirta Rodr�guez Calder�n, was Yina the prostitute. A poor woman from the country, Yina was forced to sell her body and was not respected by the community. The other extreme of women in pre-revolutionary Cuba were the ladies of the country club. ...read more.

In addition to the 10,000 women who worked in the food industry, more than eight hundred became union leaders, and over nine hundred former household servants gained employment as bank clerks. (data source: P�rez-Stable, p 107-108) Ana Betancourt Schools for Peasant Women In 1960, in connection with the FMC, Castro created the Ana Betancourt Schools for Peasant Women. The program brought Cuban women from the countryside into Havana for training. One of the rural areas focused upon by the program was Escambray in central Cuba. This was a deliberate selection because there was the beginning of a peasant counterrevolution in the region and Castro saw the opportunity to quiet the uprising by getting young women of the region into the heart of the revolution in Havana. The young women who attended the schools, nicknamed Anitas, were examined by doctors upon their arrival, and it was often the first medical attention they had ever received (Smith and Padula, p 38). The schools' curriculum included a lot of pro-revolution information and messages. In addition to the political influence, the Anitas took courses in physical education, dancing and singing, hygiene, and first aid. After a year in the school, the Anita would graduate with a diploma as a professor of dressmaking. Then they were given a sewing machine and lessons on how to teach ten other women how to use it. Many of the Anitas would return to their rural homes and start up programs of their own to further pass along the knowledge they had attained in the school, and some went as far as to found FMC delegations in their regions. By the time the Ana Betancourt Schools for Peasant Women program ended in 1976, nearly a hundred thousand women had been through its training (Smith and Padula, p39). Women and health Castro's revolution, no matter how one might like to criticize it, has been an unbelievable success as far as health care goes. ...read more.

With the lack of Soviet oil coming into Cuba, bicycles have had to replace many buses and oxen have replaced many tractors. This switch in tools has had a significant effect on Cuban society. It represents the replacement of mechanical energy with human energy. This change means that physical strength has once again become more important, therefore lessening women's career options in Cuba. Has the revolution helped or hurt Cuban women? The overwhelming answer to this question is that the Cuban revolution has helped Cuban women dramatically. In 1990, a poll was taken of Cuban women in which they were asked about how Cuba had been progressing in recent years. Sixty-three percent of the women answered "quite a bit", twenty-eight percent said "a lot", and only nine percent answered "a little" (Smith and Padula, p 182). The FMC continues to serve as a reminder of the progress that women have made in the revolution, and it continues to be one of the stronger revolutionary parties in Cuba. In 1990, the FMC included more than eighty percent of Cuban women between the ages of fourteen and sixty-five. On September 8, 1995, Vilma Esp�n had this to say at the Fourth World Conference on Women: Thirty-six years ago, the Cuban people conquered victory, after a century of struggles for their independence and sovereignty against the colonizers who exterminated the auctoctonous population, of the interventionists who sought to take up our Island, of the dictators and governments in power under the disgraceful servitude of transnational mandates impoverishing the country. Resolute and brave women patriots engaged in every necessary period of the war for national liberation. When the people took power, women identified the starting revolution, as their own Revolution, which immediately established education and medical care services free for all without distinction, the land and urban reforms, measures of greatly popular benefits made it clear what the revolution intended to do, and therefore they embraced at once, participating intensively in all construction and defense works of the new society that opened its doors with all the rights and opportunities they never had before. ...read more.