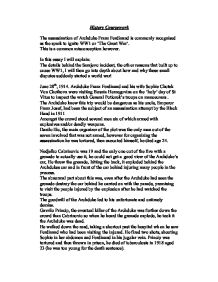 History Coursework The assassination of Archduke Franz Ferdinand is commonly recognised as the spark to ignite WW1 or 'The Great War'. This is a common misconception however. In this essay I will explain: The details behind the Sarajevo incident, the other reasons that built up to cause WW1, I will then go into depth about how and why these small disputes suddenly started a world war! June 28th, 1914. Archduke Franz Ferdinand and his wife Sophie Chotek Von Chotkova were visiting Bosnia Herzegovina on the 'holy' day of St Vitus to inspect the watch General Potiorek's troops on manoeuvers. The Archduke knew this trip would be dangerous as his uncle, Emperor Franz Josef, had been the subject of an assassination attempt by the Black Hand in 1911 Amongst the crowd stood several men six of which armed with explosives and/or deadly weapons. Danilo Ilic, the main organizer of the plot was the only man out of the seven involved that was not armed, however for organizing the assassination he was tortured, then executed himself, he died age 24. Nedjelko Cabrinovic was 19 and the only one out of the five with a grenade to actually use it, he could not get a good view of the Archduke's car, He threw the grenade, hitting the back, it exploded behind the Archdukes car and in front of the car behind injuring many people in the process. ...read more.

In 1860 the leaders of Prussia wanted to unite Germany. France was unhappy about this; the French were long time enemies of the Germans dating back to the French Revolutionary wars from 1792. France went to war with Prussia only to fall at their feet; the victorious Prussian government was able to set up a new German empire. Wilhelm 1, King of Prussia, was declared Kaiser of Germany and his chief minister, Bismarck, became the powerful Chancellor of Germany. Chancellor Bismarck was very intelligent and skilful. After 1871 he stopped the German Government from getting involved with other countries conflicts, while retaining the peace in Germany, Bismarck made sure that the French remained isolated so as long as he remained Chancellor, there was no threat of going to war with Britain or Russia. However this changed in 1888 when Kaiser Wilhelm 11 came into power, the Kaiser had a typical German attitude that Germany should have a worldwide empire like Britain. He made Bismarck retire in 1890 and began creating a more aggressive Germany, he started his campaign by ending the friendly relationship Germany had with Russia. As a result of his obnoxious attitude, other countries began to see Germany as a threat. ...read more.

The German government were constantly controlling Austria - Hungary behind the scenes, telling them what to do and say to countries that were hoping for peace, such as Britain. Secretly, the German government wanted a war to aid in creating a worldwide empire like Britain's, however Britain didn't like the idea of competition, this was a critical reason for the British joining the war - effort. The breakout of Spanish Flu, killing 25 million Europeans coincided with the signing of the treaties, unfortunately for the Germans, the devastation and ... caused was directed at the Germans, they tended to be a scapegoat to blame for everyone's problems in Europe. Originally, The Fourteen Point Plan, solely designed by Woodrow Wilson was relatively innocent, in the sense that no country gained too much and Germany didn't lose their dignity. France were given back Alsace-Lorraine, Wilson thought that this would appease the French, Georges Clemenceau had something else in mind. He wanted to crush Germany economically. France wanted to get their own back on Germany and steal some land. Like the French public, Clemenceau wanted to get their own back on Germany for invading Alsace-Lorraine, He was nicknamed "le tigre" because he was the most radical of the big four, wanting to destroy Germany so they could never invade France again. ...read more.