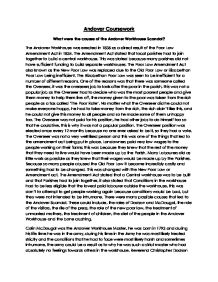 Cause of Andover workhouse scandal?

Andover Coursework What were the causes of the Andover Workhouse Scandal? The Andover Workhouse was erected in 1836 as a direct result of the Poor Law Amendment Act in 1834. The Amendment Act stated that local parishes had to join together to build a central workhouse. This was stated because many parishes did not have sufficient funding to build separate workhouses. The Poor Law Amendment Act also known as the New Poor Law was replaced due to the Old Poor Law or Elizabethan Poor Law being inefficient. The Elizabethan Poor Law was seen to be inefficient for a number of different reasons. One of the reasons was that there was someone called the Overseer, it was the overseers job to look after the poor in the parish, this was not a popular job as the Overseer had to decide who was the most poorest people and give them money to help them live off, the money given to the poor was taken from the rich people as a tax called 'The Poor Rate'. No matter what the Overseer did he could not make everyone happy, he had to take money from the rich, the rich didn't like this, and he could not give this money to all people and so he made some of them unhappy too. ...read more.

The fact that woman and unmarried woman were treated like this, would have led to the reason of why there was a scandal in the Andover workhouse. In the Andover Workhouse the paupers were given only enough food for them to live, the food given to them was very little, and the food that was given to them was not at all edible, but because the paupers would have been so hungry they would have just eaten it anyway. Although that rations that the paupers received were so small, McDougal even stole from them, leaving them with even less food. Samuel Green says "We only had bread and gruel for breakfast.....so we ate the stale stinking meat", this shows that what they ate was so bad, and they were so hungry that they did it anyway. Diets show that in other work houses there was more variety of food, larger portions more nutrition and that they were healthier, although in Andover the portions are small, inadequate and the people at Andover are starving. As well as this, McDougal would even take the alcohol from the paupers that was prescribed to them. Bone crushing was the only job that was available for the paupers in the Andover Workhouse; the job was not pleasant at all! ...read more.

Although it says 'less eligible', it does not say how bad conditions can actually be, if the stating of the Law was worded better and actually stated how bad Conditions could be, then there may never have been a Scandal at the Andover Workhouse. The food in the Andover Workhouse was in very small quantities, it was rotting, because of this, the workers would eat the rotting flesh off the bones that they were supposed to crush as one of the jobs at the workhouse. I believe that Dodson and McDougal had a very big part to play in the scandal, everything that actually happened in the workhouse and all the rules were down to them. McDougal did whatever he wanted to whenever he wanted to do it and he never took anyone else's thoughts into consideration. He fed everyone little food, he raped the woman who had no protection from the men as they were split up, he singled people out so that they were more vulnerable, he took the food and drink from the paupers. All of this was down to him, and he could have changed it if he wanted to. The vague wording of the Poor Law Amendment Act was open to individual interpretation and it allowed McDougal to take conditions in the Andover Workhouse to extremes. ?? ?? ?? ?? ...read more.