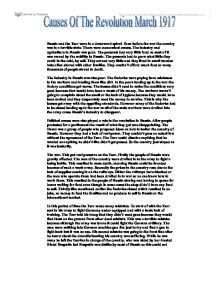 Cause of the March Revolution 1917

Russia and the Tsar were in a downward spiral. Even before the war the country was in a terrible state. There were economical causes. The industry and agriculture in Russia was poor. The peasants had very little land as most of it was owned by the nobility in Russia. The peasants had to grow what little they could in the cold, icy soil. They earned very little and they lived in small wooden huts often shared with other families. They couldn't afford much food so many thousands of people staved to death. The industry in Russia was also poor. The factories were paying bare minimum to the workers and treating them like dirt. In the years leading up to the war the factory conditions got worse. The bosses didn't need to make the conditions very good because that would have been a waste of his money. The workers weren't going to complain about the smell or the lack of hygiene because they would have been sacked and they desperately need the money to survive. ...read more.

Thirdly like mentioned earlier the factories closed which resulted in no jobs, no money to feed the families and no produce to sell in Russia or the international market. In this period of time the Tsar made many mistakes. To start of with the Tsar sent in his army to fight Germany under equipped and with a basic lack of training. The Tsar told his troop that they didn't need guns because they would find them on the ground from other dead soldiers. This was a terrible mistake because although the army was brave it could fight the German artillery. The men were walking into German machine gun fire just to try and find a gun to fight back but it was no use. His second mistake was going to the front line after he heard about the dreadful beating his country was suffering. While he was away he left the Tsarina in charge of the country, who was aided by her trusted friend Rasputin but Rasputin was dislike by most of Russia so this could not have been good news for the Tsar. ...read more.

Overall there were many different causes of the revolution. I don't think that the war was the main cause of the war. This is because at the start of the war Russia was quite happy about going to war and thought they would win and then they could get land in other countries and sort out there lack of land problem. I also don't think this was the main cause because he was unpopular before the war because of key decisions he had made like the Duma and not giving power to the people. Also the fact that Rasputin had been able to get so close with the Tsarina. People thought that he was hypnotising her to tell the Tsar what to do. However I do think that the war did contribute to the revolution as the defeat, the deaths, the hunger, the poverty and the Tsar not conceding the war but carrying on to receive further death, hunger and poverty. I think the March 1917 Revolution was caused by a mixture of defeat in the war and the Tsars lack of capability to run his own country. ...read more.