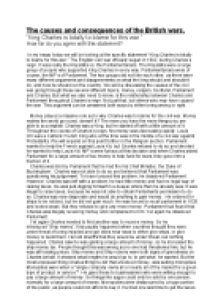 Causes and consequences of the English Civil War

﻿The causes and consequences of the British wars. ?King Charles is totally to blame for this war.? How far do you agree with this statement? In my essay today we will be looking at the specific statement ?King Charles is totally to blame for this war.? The English Civil war officially began in 1642, during Charles`s reign. It was really the Royalists vs. the Parliamentarians. The Royalists were a large group of people who supported King Charles in every way. Parliamentarians were of course, the MP`s of Parliament. The two groups did not like each other, as there were many different arguments and disagreements on what the king should and shouldn?t do, and how he should run the country. We will be discussing the causes of the civil war going through these several different topics, money, religion, Scotland, Parliament and Charles. But what we also need to know, is the relationship between Charles and Parliament throughout Charles`s reign. Not just that, but others who may have caused the war. This argument can be answered both ways by either being wrong or right. Money played a massive role as to why Charles was to blame for the civil war. Money makes the world go round, doesn?t it? The more you have the more things you are able to accomplish. Charles was a King, but he started off with a little amount of it. Throughout the course of Charles`s reign, his money was decreasing rapidly. Louis XIII was a Catholic French King who at the time was in the middle of a civil war against Protestants. We will expand on this point further in the Religion section. ...read more.

His advisors did not really help his arguments, as some told him ways to make money illegally. Most of what Charles did was based around the advisors ideas. It was like Charles was becoming an easy target for parliament. Closing parliament more than once was not a good idea, as it did not show he was powerful, but that he was desperate. It was like he wasn?t trying to give any solid reasons as to why he shut down Parliament. It was literally like, you?re not listening to me go away. It was like 2 children on a playground. Also, in many points in time greed took over in Charles`s mind. These personalities ruined Charles`s image and this is where most of people hatred towards Charles came from. Having power meant having respect, as Charles?s power decreased so did his respect. Charles had realized Parliament was gaining power, but Charles believed they did not need. Charles believed strongly in ?Divine Rights?. Divine rights meant you were picked by God to be the Monarch. Why would Parliament need all of that power if God did not choose them. Back then, if you though the King was wrong you thought God was wrong, because had chosen him and God was always right, right? You were considered a bad Christian if you did not believe in Divine rights. Charles might have got out of trouble just by saying the term ?Divine Rights?. People did not like this to keep on happening, so people began to side to parliament Parliament was one of the topics I?d like to discuss. ...read more.

England was a Protestant Country, as it was ruled by Charles who was a Protestant. But people started to doubt the king?s beliefs when he married a Catholic woman named Henrietta Maria. June 13th 1625 was the wedding date; it was one of the most controversial marriages in history. Why did Charles marry a Catholic Woman? Maybe it was because he wouldn?t peace between the two religions. But others didn`t see it that way. It was a really unpopular marriage, as people did not want to be ruled by a Catholic Family. This was one of the points Parliamentarians could attack the king on. This is where people began to doubt the king. If they had children and were bought up by Catholics, which means the heir to the throne would be Catholic and every one would have to change their beliefs and thoughts. MP`s suspicion became greater once Charles introduced the Prayer book to Scotland. This was way too similar to the Catholics book for their liking. This had an instant effect on the Scottish when they saw what they were doing was similar to what Catholics did. This may have caused the civil as People did not want to be ruled by Catholics. To conclude I believe this statement is not entirely true. This is because it says Charles was ?totally? to blame for the war, but he was not as there were other causes. However, I would shift most of the blame towards Charles`s side, as he was the one who made the final decision. Re-reading my essay I believe I have made more points as to why Charles was to blame. BY AADIL IQBAL Why he was to blame- http://baconsblueblazer.blogspot.co.uk/2008/06/who-was-to-blame-for-english-civil-war.html http://www.users.globalnet.co.uk/~sgood/leeryan2.html http://www.historylearningsite.co.uk/english_civil-war.htm Nineteen Propositions- http://en.wikipedia.org/wiki/Nineteen_Propositions ...read more.