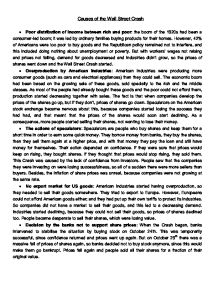 Causes of the Wall Street Crash

Causes of the Wall Street Crash * Poor distribution of income between rich and poor: the boom of the 1920s had been a consumer-led boom; it was led by ordinary families buying products for their homes. However, 42% of Americans were too poor to buy goods and the Republican policy remained not to interfere, and this included doing nothing about unemployment or poverty. But with workers' wages not raising and prices not falling, demand for goods decreased and industries didn't grow, so the prices of shares went down and the Wall Street Crash started. * Overproduction by American industries: American industries were producing more consumer goods (such as cars and electrical appliances) ...read more.

As a consequence, more people started selling their shares, not wanting to lose their money. * The actions of speculators: Speculators are people who buy shares and keep them for a short time in order to earn some quick money. They borrow money from banks, they buy the shares, then they sell them again at a higher price, and with that money they pay the loan and still have money for themselves. Their action depended on confidence. If they were sure that prices would keep on rising, they bought shares. If they thought that prices would stop rising, they sold them. This Crash was caused by the lack of confidence from investors. ...read more.

So companies did not have a market to sell their goods, and this led to a decreasing demand. Industries started declining, because they could not sell their goods, so prices of shares declined too. People became desperate to sell their shares, which were losing value. * Decision by the banks not to support share prices: When the Crash began, banks intervened to stabilise the situation by buying stock on October 24th. This was temporarily successful, since confidence returned and prices went up again. But on October 29th there was a massive fall of prices of shares again, so banks decided not to buy stock anymore, since this would make them go bankrupt. Prices fell again and people sold all their shares for a fraction of their original value. ...read more.