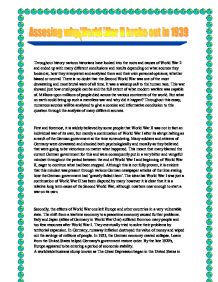 Throughout history various historians have looked into the roots and causes of World War 2 and ended up with many different conclusions and results depending on what sources they looked at, how they interpreted and analyzed them and their own personal opinions; whether biased or neutral. There is no doubt that the Second World War was one of the most devastating and most brutal wars of all time. It was a wakeup call to the human race. This war showed just how cruel people can be and the full extent of what modern warfare was capable of. Millions upon millions of people died across the various continents of the world. But what on earth could bring up such a merciless war and why did it happen? Throughout this essay, numerous sources will be analyzed to give a concise and informative conclusion to this question through the analysis of many different sources. First and foremost, it is widely believed by some people that World War II was not in fact an individual war of its own, but merely a continuation of World War I after its abrupt halting as a result of the German government at the time surrendering. Many soldiers and citizens of Germany were devastated and shocked both psychologically and morally as they believed that were going to be victorious no matter what happened. This meant that many blamed the current German government for this and were consequently put in a very bitter and vengeful mindset throughout the period between the end of World War I and beginning of World War II, eager to continue what had been stopped. Although this is not fully proven, it is evident that this mindset was present through various German newspaper articles of the time stating how the German government had 'gravely failed them'. The idea that World War I was just a continuation of World War II has been disputed by many however it is clear that it is a relative long term cause of the Second World War, although nowhere near enough to start a war on its own. ...read more.

He had to watch all his friends die in the War and upon finding out that Germany had surrendered and had lost war, became emotionally devastated. He blamed this on the current monarchy and on the Jewish people for ruining and corrupting the German government, both morally and financially. Some argued that he needed scapegoats, excuses for Germany's loss, anything to avoid the thought that Germany may have been responsible for losing the war or too weak to win the war. This clearly shows that extreme patriotic and nationalistic views he had towards Germany. He was later employed by the current German government to spy on a new political group that was founded to see if they posed any threat to overthrowing the German government. At that time Hitler felt great disdain towards the current government as he thought they were bowing down to the 'Big Four' and were doing anything to stay in power regardless if Germany lost all power and dignity. So Adolf Hitler went to spy on this new party. They were merely a group of 8 people but Hitler was fascinated by the ideas and policies they put forward that he ended up joining then and eventually became their leader. The leader of the newly powerful Nazi party. He portrayed such challenging and strong ideas throughout the media and through propaganda that the German government would not tolerate it, had him arrested and put him in prison for around 2-3years. In his time in prison he subsequently wrote the famous book; "Mein Kampf". The book was very interesting as it portrays Hitler's mind set, his extreme beliefs and how sensitive and unsure he was of himself deep down within. He explained his nationalistic pride and how he though only the 'Aryan' race was superior to all of humanity. Meanwhile, the remaining Nazi supporters campaigned for Hitler's release. He was released after about 3 years and instead of being looked upon badly for being imprisoned, German people thought he was a hero as a result of propaganda. ...read more.

Appeasement would strengthen his beliefs, widen the reach of the German empire in both area of land taken over and resources taken from them. Ultimately it would give rapidly growing determination to Hitler, edging him on to take even more land through appeasement or force, especially the two countries he had his eyes on most; Russia and Poland. Finally, in conclusion and in my opinion the most important cause of all is nationalism. Hitler was the leader of Germany who put the whole of World War II into motion. He forcibly took over lands and countries throughout the process of appeasement and lebensraum which were a result of wanting Germany to be a great country again, to regain its pride and power after losing them through the Treaty of Versailles and continue, as he thought, the disrupted World War I. However before the Treaty of Versailles was signed, Hitler and many Germans had extreme nationalistic pride and believed that their country was superior to all others in the world. Even if the Treaty of Versailles never existed I believe that World War II would have taken place anyway because of Hitler's and many people before him, beliefs. All the Treaty of Versailles would have consequently done is just fuel their anger and desire for revenge on the world and give greater urge for German dominance. Even if Hitler had never existed, many people who shared his ideas and had even stronger beliefs of German dominance would have taken his place anyway. It could almost be compared to the consuming thoughts of nationalistic pride and superiority using German people as vessels spreading to more and more people. Overall it seems clear that the concepts and beliefs brought on by nationalism led to the concepts of lebensraum and Nazism which were the foundational beliefs of Hitler and many other Germans of the time meaning that nationalism and extreme patriotism were at the core of the causes of World War II and led to a long chain of events that together ultimately put World War II into motion. ...read more.