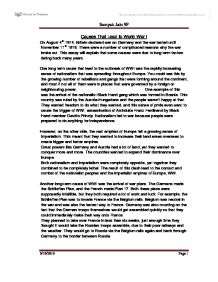 Causes that Led to WWI

Causes That Lead to World War I On August 4th 1914, Britain declared war on Germany and the war lasted until November 11th 1918. There were a number of complicated reasons why the war broke out. This essay will explain that some causes were due to long term factors dating back many years. One long term cause that lead to the outbreak of WWI was the rapidly increasing sense of nationalism that was spreading throughout Europe. You could see this by the growing number of rebellions and gangs that were forming around the continent, and most if not all of them were in places that were governed by a foreign or neighbouring power. One example of this was the arrival of the nationalist Black Hand gang which was formed in Bosnia. This country was ruled by the Austria-Hungarians and the people weren't happy at that. They wanted freedom to do what they wanted, and this sense of pride even went to cause the trigger of WWI, assassination of Archduke Franz Ferdinand by Black Hand member Gavrilo Princip. Nationalism led to war because people were prepared to do anything for independence. However, on the other side, the vast empires of Europe felt a growing sense of imperialism. ...read more.

The Alliances were mutual agreements between countries that they would aid each other in the case of war. Thus, under the alliance system, if a country was attacked it would call for help from another country in the agreement, and they had to oblige under the rules of the contract. This set off a chain reaction of countries joining a war to help so it could easily lead to a world war, as was the case in 1914. First, Serbia got invaded by Austria, and they then called Russia for help. Russia started to aid the Serbia, so Germany, which was in cahoots with Austria, declared war with Russia. Russia then asked help from France and Britain who then respectively joined the war, due to the Triple Entente agreement. One by one, the countries got mixed up in the war. Though the alliance system had a lot of plus sides to it, the potential down sides could be devastating. There were two major alliances at the time: The Triple Alliance (from 1882), and the Triple Entente (from 1907). The Triple Alliance involved Germany, Austria-Hungary and Italy, and the Triple Entente included Britain, France and Russia. These six countries were regarded to be some of the most powerful in Europe. ...read more.

When Gavrilo Princip killed the Archduke and his wife, it gave the Austrians an ideal excuse to invade Serbia. In conclusion, the main causes that started the First World War were the Alliances, Imperialism and Nationalism, Militarism, War Plans and finally the Assassination at Sarajevo. All these causes also link and interwine, for example * Both Nationalism and Imperialism were the cause for the Assassination of the Archduke, which in turn was the trigger for WWI. This was because imperialist Austria was ruling Nationalist Bosnia so they clashed and that lead to the death of the Archduke. * Also, the Alliances and the War Plans were interlinked because if not for the Alliances, the War Plans would not have been made in the way they were made. The Schlieffen Plan was to first go through Belgium then invade France, and then go back to attack Russia. Thus, if not for the Triple Entente Alliance, France could have been neutral and then the Schlieffen plan would not have been made to invade France. * Furthermore, the Arms Race was also linked to the Alliances for the same reasons as explained in the paragraph above: If not for the Alliances, there would have been no enmity or hostility between Germany and Britain, so then there would have not been an Arms Race for them. ?? ?? ?? ?? Samyak Jain 9P 9/10/2010 Page 1 ...read more.