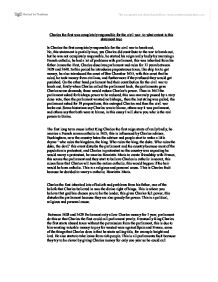 Charles the first was completely responsible for the civil war- to what extent is this statement true Is Charles the first completely responsible for the civil war to break out, No, this statement is partially true, yes Charles did contribute to the war to break out, but he was not completely responsible, he started his reign really badly by marrying a French catholic, he had a lot of problems with parliament, this was inherited from his father James the First, Charles dissolves parliament and rules for 11 years between 1629 and 1640. In this period he introduces preposterous taxes, like ship tax to get money, he also introduced the court of Star Chamber 1635, with this court that he ruled, he took money from civilians, and furthermore if they refused they would get punished. On the other hand parliament had their contribution for the civil war to break out, firstly when Charles called the parliament back, the parliaments gave Charles some demands, these would reduce Charles's power. Then in 1641 the parliament asked for bishops power to be reduced, this was narrowly passed by a very close vote, then the parliament wanted no bishops,, then the last string was pulled, the parliament asked for 19 propositions, this outraged Charles and then the civil war broke out. Some historians say Charles was to blame, others say it was parliament, and others say that both were to blame, in this essay I will show you who is the real person to blame. ...read more.

then the Scots invaded northern England, they started to ask for 850 pounds a day to the king to stop them going any moving further south, Charles the first did not have this vast amount of money, so again in his desperation for money he recalls parliament hoping that they would compromise and give him the money, this parliament eventually lasted 20 years this is why it is called long parliament. The parliament had the upper hand when they last met, now they looked more superior than Charles in this certain situation. All the members of parliament were unified against Charles; at this point there was no question about the civil war due to no army that was on Charles' side. If parliament were to give money to the king, Charles would have to accept the terms and conditions. In November 1640 parliament released their demands, some of the most important ones were 'ministers should be appointed who will advise Charles, some of these ministers should be appointed by parliament' Charles hated this one. 'The king should get rid of court of Star Chamber' this meant that Charles could not get everything that he wanted and finally 'regular meetings should be held of parliament' this way parliament could keep control of the situations. I think all these demand are fair. Some of the important concessions made by Charles were 'parliament must meet every 3 years' this is very minimal amount of meetings, Charles did this so he could keep some power, 'Strafford has been tried for treason and executed' this made Charles furious that he had to kill his own advisor, he was forced to do this by parliament on may 1642. ...read more.

On 22nd of august 1642 the armies were ready to fight. This is all parliaments fault due to them being over greedy for power; they released these demands because they could no longer trust him due to Charles embarrassing himself when he tried to arrest 5 mp's Too much extent Charles was to blame, he made huge blunders, but it was not entirely Charles' fault, parliament had their share especially towards the end of the build up to the civil war, at the beginning they gave Charles money for only one year, forcing him to kill his advisor, seizing control over the army and most importantly the 19 propositions that pulled the last string, however Charles triggered a lot of these, he started absurd taxes, complications in religion, but most importantly he abused his power, this left him with absolutely no supporters. By trying to arrest 5 mp. The statement has a fair balanced motion, both parties to blame, Charles ruled without parliament for 11 years due to parliament doing bad things to trigger it off. Parliament asked some fair demands in November 1640 due to Charles having financial problems, Charles big blunder was when he tried to arrest 5 mp's because they criticised him, Charles abused his power too much but on the other hand parliaments big blunder was when they asked the 19 propositions, this made Charles lose all his power this was really unfair to chares the first. So I think the civil war ended up being both parties fault due to them being greedy for power. It is not fair saying it was one sides fault. ...read more.