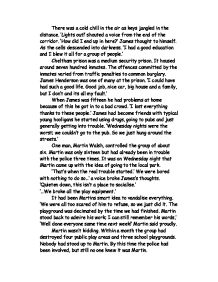 There was a cold chill in the air as keys jangled in the distance. 'Lights out!' shouted a voice from the end of the corridor. 'How did I end up in here?' James thought to himself. As the cells descended into darkness. 'I had a good education and I blew it all for a group of people.' Cheltham prison was a medium security prison. It housed around seven hundred inmates. The offences committed by the inmates varied from traffic penalties to common burglary. James Henderson was one of many at the prison. 'I could have had such a good life. Good job, nice car, big house and a family, but I don't and its all my fault.' When James was fifteen he had problems at home because of this he got in to a bad crowd. 'I lost everything thanks to these people.' James had become friends with typical young hooligans he started using drugs, going to pubs and just generally getting into trouble. ...read more.

Chris was a gifted boy, he didn't agree with Martin's ways but was a friend though fear. 'Martin took it out on Chris. Punching, kicking. No one stood up to him. After that night we never saw Chris again.' 'As time went on and our crimes got worse I started to see how I had wasted my life.' James and the group, still lead by Martin, had started stealing. At first it was just sweets then CDs, clothes, CD players, TVs if it wasn't bolted to the floor Martin would steal it. ' I could handle stealing small but TVs CD players that had gone to far. Stealing a CD player was when I first got caught.' 'A local shop Tim's TVs was my target on that particular day. It was a small family business easy to steal from, so I thought.' 'It was a Saturday morning and the shop was rather busy, that surprised me, I had stolen many times before so I just walked in. ...read more.

'It was cold and dark, I suddenly realised what had happened, id been involved in a grand theft auto. I was as horrific as Martin. I had wasted a good education to become a common criminal.' It had been two years since James met Martin; it had been a roller coaster of vandalism and embezzlement. James had no future. That wasn't the end of Martin. The police had caught him. Martin had told the police about James's involvement. The police paid James a visit the next day. 'It was terrible; the look of disappointment on my parents faces. They had no idea. Both Martin and I were called into court on grand theft auto. The judge was harsh. To set an example he said, a jail sentence and community service.' So James isn't the only one in prison. 'Martins in here too.' A voice disrupts James thoughts. 'James shifts over.' The voice bellowed from the darkness. 'No, Martins in here all right. On a jail sentence. The only difference is at least community service lets me go home at night,' 'Thanks mate. I'll see you tomorrow.' With that James was gone. ...read more.