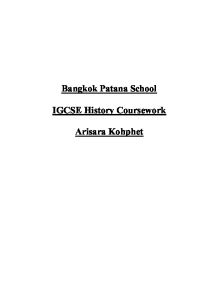 Bangkok Patana School IGCSE History Coursework Arisara Kohphet History coursework assignment A: China 1945-90 1. Study source A. What do you think was the purpose of the newspaper in publishing the description? Use the source and your knowledge of the period to explain your answer. The newspaper in Mao's time was censored by the government before publishing to public. All of the media in China were under totalitarian state. From the extract, "Chairman Mao, our most respected and beloved great leader" It tries to promote the typical personality and to convince people how great Mao is. The descriptions of the mass rally by the red guards portray it as a huge and important event. "Young fighters" which referred to the red Guards make the people see them as an energetic campaign, which promotes communism. "All nationalities love you strongly" refers to the people of all ethnic groups of China. This shows that the country is united and strong. "You should go to the masses and be one with them and carry on the great proletarian Cultural Revolution even better" this massage meant to be a warning to persuade people to join the Red Guards. People are convinced by these ideas of Mao thorough propaganda. 2. Study source B What impression is the artist trying to give of the Cultural Revolution? Explain your answer. Artists during Mao's times were expected to promote government propaganda. The artist's intention was the give the impression of a joy and wonderful event. The painting portrays a celebration of the Chinese people, which shows the unity of the country. The people also have different clothing on which present all the different of the people of the ethnic groups. This refers to the typical cult of personality. The position of Mao in the picture represents the importance of him, as a father of the Cultural Revolution. The picture is also on top of the man head, which shows that the man respects Mao, and worships him as a beloved leader. ...read more.

This movement was in fact a prelude to the Cultural Revolution, which was aimed, among other objectives, at purging Liu Shaoqi. The Cultural Revolution was initiated by Mao as an ideological struggle in art and academic circles in 1966, throwing the entire nation into a fury of chaos and destruction that did not end until Mao's death in 1976. On one level, Mao planned to further revolutionize society and rid it of any vestiges of "feudal thought and foreign influence." He attacked what he saw as an increasingly conservative bureaucracy, lacking in revolutionary spirit. At a deeper level, Mao hoped to recover the power and respect he had lost following the disastrous Great Leap Forward. At the highest level, the Cultural Revolution was an attempt by Mao to wrest power from "rightists," such as Liu Shaoqi and Deng Xiaoping. Beginning in 1966, the 73 year-old Mao encouraged the organization across China of revolutionary committees and teenage groups called Red Guards. Schools were closed, and Red Guards were given free railway passes to travel around the country to wage war against revisionism and the "Four Olds": old ideas, culture, customs, and habits. This movement resulted in the senseless destruction of books, temples, and art. Brandishing little red books of Quotations of Chairman Mao, the uniformed Red Guards broke into and ransacked the houses of intellectuals and officials, denouncing them and parading them through the streets with dunce caps on their heads. Professors and artists were forced to stand on platforms for hours, bent with their arms stretched back, confessing their "crimes." A countless number died from beatings or suicides. On university campuses, students attacked administrators and covered walls with revolutionary slogans and posters. Much of the government was purged, including former leader Liu Shaoqi, who died in prison in 1969. By 1969, the Cultural Revolution had thrown every level of society into disorder. Mao was forced to end factional fighting between groups of Red Guards by ordering in the army and sending the youths to the countryside. ...read more.

Mao would never have tolerated this, he deemed the people not worthy of this knowledge. In the media under Mao everything was strictly controlled. Under Deng however, the introduction of televisions meant the people were more aware of news and affairs abroad. China became part of the modern world, as westerners knew it. Pop concerts, dancers and other western entertainment became more popular, there were more bikes, cars and motorbikes and there was more time for recreational activities. The people were more relaxed and the standard of living greatly improved. This would certainly not have been allowed in Mao's time. In tourism, Mao had no idea how to treat foreigners and never allowed. Deng realised that tourism would bring big business and outside influences this would help China to become more modern. In conclusion there have been so many changes that virtually none of Maoist china exists today. The economy was revamped and made more modern, there was a greater capacity to become wealthy and afford new things. People were given more responsibility in the workplace and were free to make their own decisions. The younger generations were helped to educate themselves and given a free choice as to what they wanted to do with their lives. People's social life was improved, they had more time and they were happier. Because of the change in the economy they had more money to spend. Politically China had changed, communism was still there but the beliefs had lessened a bit to allow people to be able to live in the world comfortably, however the main points are still in focus. The people's army is still running as it was in Mao's day but it is now much less of a force. China Still had a long way to go to become a democracy and as Tiananmen Square shows that some people do want it. These changes maybe a long time coming but at least they escaped Mao's restrictive control. ...read more.