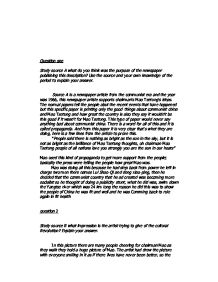 Question one Study source A what do you think was the purpose of the newspaper publishing this description? Use the source and your own knowledge of the period to explain your answer. Source A is a newspaper article from the communist era and the year was 1966, this newspaper article supports chairman's Mao Tsetung's ideas. The normal papers tell the people abut the recent events that have happened but this specific paper is printing only the good things about communist china and Mao Tsetung and how great the country is also they say it wouldn't be this good if it wasn't for Mao Tsetung. This type of paper would never say anything bad about communist china. There is a word for all of this and it is called propaganda. And from this paper it is very clear that's whet they are doing, here is a few lines from the article to prove this. " People said there is nothing as bright as the sun in the sky, but it is not as bright as the brilliance of Mao Tsetung thoughts, oh chairman Mao Tsetung people of all nations love you strongly you are the sun in our heats" Mao used this kind of propaganda to get more support from the people; basically the press were telling the people how great Mao was. Mao was doing all this because he had step back from power he left in charge two men there names Lui Shao-Qi and ...read more.

Question 4 Study source D+E, do you think that the message of these cartoons are the same explain your answer. The messages of these two cartoons aren't the same they give across different points and different meanings, although they do agree in some as parts they do agree for example they both use violence to get the point across also they both show someone striking down any think that is anti-communist or pro capitalism, the main think that is different though about the two, is that they were drawn by different countries, source D was drawn by the Chinese government and it was for communism and source E was drawn by an American who were against communism which mean source E is anti communist .source D is for Mao is shows an army of Red Guards destroying capitalism and all the poor people rising up against it. This cartoon was made in China and was most likely influenced by the Chairman Mao. Cartoon E was made in America who was very anti communist is shows someone speaking up in a communist China and then being knocked down this shows that no one is aloud to speak up against Mao's ideas and if they did they will be brought down. And in the last section of the cartoon no one speaks up because if they did they will be struck down just like people before who spoke up against Mao. ...read more.

But the things he described were the kinds of things that were going on at that period of time, and we know this though other sources. Both of these sources are very useful but in different ways, source H is a visual source and it shows what was going on in picture form and source I gives the people an insight to what the states of minds people were then! Source 7 Do sources J and I agree or disagree about the Cultural Revolution? These two sources agree and differ for example in both sources we were told of university professors were made to clean toilets and other demeaning jobs This was made as a punishment for being capitalist. But in source I the Red Guard talk about putting the teaches and professors in jail because intellectuals were said that resist the communist way and develop a bourgeois way of thinking. There are two differences between the sources source I is against intellectuals because it is being told by a Red Guard but source J is in favour of intellectuals because he is one that means that they disagree they also disagree because source I says that the Revolution was worth it because keeping intellectuals alive would not have cost society as it did but source J is saying that the revolution set China back 20 years because you people has missed out on there education ...read more.