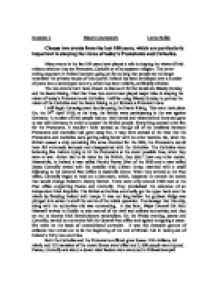 Choose two events from the last 100 years, which are particularly important in shaping the views of today's Protestants and Catholics.

Question 2 History Coursework Lorna Hullah Choose two events from the last 100 years, which are particularly important in shaping the views of today's Protestants and Catholics. Many events in the last 100 years have played a role in shaping the views of Irish citizens whether they are Protestant, Catholic or of no apparent religion. The never-ending argument in Ireland has been going on for so long that people can no longer remember the primary causes of this quarrel. Ireland has been developed over a number of years into a stereotyped country, which has been unfairly, artificially divided. The two events that I have chosen to discuss in further detail are Bloody Sunday and the Easter Rising. I feel that these two events have played major roles in shaping the views of today's Protestants and Catholics. I will be using Bloody Sunday to portray the views of the Catholics and the Easter Rising to put forward a Protestant view. I will begin this assignment by discussing the Easter Rising. This event took place On, the 24th April 1916, at the time, the British were participating in the war against Germany. ...read more.

They were shooting at innocent people. These people may have been taking part in a march that was banned but that does not justify the troops coming in and firing live rounds indiscriminately. I would say that without hesitation that it was sheer, unadulterated murder. It was murder" I think that this quote portray s the way that many of the Catholics feel about what happened on Bloody Sunday. It makes the Catholics realise that the Protestants may go to any lengths to hurt the Catholics. It is a sad state of play when the authorities in Ireland shoot innocent citizens. To conclude, both of these events have played very important roles in shaping the views of Catholics and Protestants today. But, overall I would say that Bloody Sunday was the most important event out of the two for shaping views. This is because, the British army did something completely immoral when their lives were not endangered by the Catholics whereas, the Easter Rising was a disaster in Ireland but both the Catholics and the Protestants played roles in destroying lifes. I am not saying that I would justify the Easter Rising by any means I am just stating that it was both the Catholics and Protestants playing against each other and pushing people too far that caused the Easter Rising. ...read more.