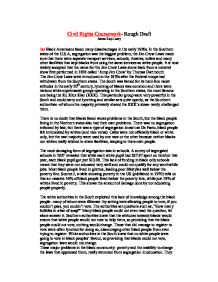 Civil Rights Coursework- Rough Draft James Ray-Leary 1a) Black Americans faced many disadvantages in the early 1950s. In the Southern states of the U.S.A, segregation was the biggest problem, the Jim Crow Laws made sure that there were separate transport services, schools, theatres, toilets and many other facilities that kept blacks from using the same services as white people. It is now widely accepted that the name for the Jim Crow Laws stems back from a minstrel show first performed in 1828 called 'Jump Jim Crow' by Thomas Dartmouth. The Jim Crow Laws were introduced in the 1870s after the Federal troops had withdrawn from the Southern states. The South was famed for its hard-line racist attitudes in the early 20th century, lynching of blacks was common and there were various white supremacist groups operating in the Southern states, the most famous one being the Ku Klux Klan (KKK). This particular group were very powerful in the South and could carry out lynching and similar acts quite openly, as the Southern authorities -of whom the majority privately shared the KKK's ideas- rarely challenged them. There is no doubt that blacks faced worse problems in the South, but the black people living in the Northern states also had their own problems. There was no segregation enforced by law, but there was a type of segregation known as De Facto, black people felt intimidated by whites (and vice versa). Cafes were not officially black or white only, but the vast majority were used by one race or the other because neither blacks nor whites really wished to share facilities, keeping to there own people. The most damaging form of segregation was in schools. A survey of segregated schools in 1937 revealed that while each white pupil had $37.87 spent on him/her that year, each black pupil got just $13.08. This lack of funding in black only schools meant that they were not educated very well and could not qualify for any worthwhile jobs. ...read more.

There were speeches, black music and Martin Luther King performed his "I have a dream..." speech. The Kennedy administration took a battering, with the SNCC criticising them for failing to protect Southern blacks and King warning of more rioting to come if a Civil Rights Act was not signed. President Kennedy, as most blacks predicted, was too slow in finding a passage to a civil rights bill. A few months later Kennedy was assassinated and replaced by Lyndon Baines Johnson who, to the surprise of many activists, pushed the Civil Rights Act 1964 through Congress almost immediately. The bill outlawed all segregation and also bias towards black people in education and employment, a major breakthrough. Despite the Civil Rights Act being passed, there were still a number of issues to be faced by the Civil Rights activists. One of these was to get the vote for the southern states, which still did not allow black people to vote. Mississippi in particular was a hard line racist state in which many black people were still lynched for attempting to vote. A white supremacist murdered NAACP leader, Medgar Evans, in 1963 in Jackson Mississippi. The murderer was not charged until 1994. Martin Luther King began a voting rights movement in Selma Alabama in 1965, his aim was to get national media attention to his cause, and that he did. The protestors from the SCLC and the SNCC gathered and prepared to march over the Edmund Pettis Bridge. They were blocked by police who attacked them with dogs, batons and tear gas when they refused to turn back, provoking national outcry at the number of people injured. Afterwards, the Selma officials obtained a court order banning these marches, the young SNCC activists challenged King to disregard the order, but he and the SCLC felt that it would damage their hopes of gaining a voting rights act. On the second attempt to march over the bridge, King turned back once they reached the police blockade, saying that the activists had made their point. ...read more.

Nevertheless blacks were eventually accepted by society, De Facto segregation gradually subsided in the North. But even today some Southern states are still notoriously racist. So, although great strides were taken to improve the way black people were looked upon in society during the Civil Rights Movement, many would say that there is still work to be done even today. The blacks have not fared very well economically to date either. Many black people still live in ghetto areas in the US, which are famous for their violent, crime-riddled reputations. There are still far more white middle-class people than there are black and white people still obtain the highest positions in society. Having said this however, there are many black judges in the US, a sure sign that there are black people obtaining some of the respectable jobs in American society. It is a sad fact that there are still many more black people living below the poverty line compared to white people, despite the huge efforts and strides made in the 1960s by the Civil Rights Activists. Perhaps the most important way in which black society has improved since the Civil Rights Act is in their culture. The Black Power Movement caused an upsurge in black culture- everything from the arts to sport. This gave black people a sense of identity, a pride that they had never had as Black Americans before. This was a key factor in helping black people to become accepted by society. They had sports stars, pop stars and a whole range of black literature, having these famous, respected people as 'representatives' of their culture helped black people integrate into society. It would be completely unfair to say that the Civil Rights Movement had been unsuccessful, having accomplished so much within just 20 years. It is fair to say that the Civil Rights Movement had succeeded in many ways. But it must be considered that the movement failed in certain areas and that successes often came at a cost- the lynching during the Voting Rights Movement and the violence of the Edmund Pettis Bridge crossing are prime examples. ...read more.