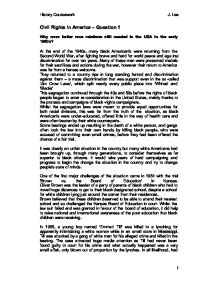 Civil Rights in America - Question 1 Why were better race relations still needed in the USA in the early 1960s? At the end of the 1940s, many black American's were returning from the Second World War, after fighting brave and hard for world peace and against discrimination for over ten years. Many of these men were presented medals for their sacrifices and actions during the war, however their return to America was far from a heroes welcome. They returned to a country ripe in long standing hatred and discrimination against them - a mass discrimination that was support even in the so-called 'Jim Crow Laws', which split nearly every public place into 'Whites' and 'Blacks' This segregation continued through the 40s and 50s before the rights of black people began to enter re-consideration in the United States, mainly thanks to the protests and campaigns of black-rights campaigners. Whilst the segregation laws were meant to provide equal opportunities for both racial divisions, this was far from the truth of the situation, as black American's were under-educated, offered little in the way of health care and were often beaten by their white counterparts. Some beatings ended up resulting in the death of a white person, and gangs often took the law into their own hands by killing black people, who were accused of committing even small crimes, before they had been offered the chance of a fair trial. It was clearly an unfair situation in the country but many white Americans had been brought up, through many generations, to consider themselves as far superior to black citizens. It would take years of hard campaigning and progress to begin the change the situation in the country and try to change people's state of minds. One of the first major challenges of the situation came in 1954 with the trial 'Brown vs. the Board of Education' in Kansas. ...read more.

Many white Americans had been brought up to see black people as an inferior race that did not deserve rights and votes. In many people's eyes, what was happening before them was a complete destruction of all they believed and had been taught was right and wrong in society and many were determined to keep things the way they believed they should be, with or without the support of the law. In conclusion, despite rigorous protesting and demonstrating from civil rights campaigners, and the help of major changes in the laws of American society, the hard challenge of removing racial discrimination and segregation from all communities was still not complete, and it would take a large amount of work to change peoples beliefs and obtain the full co-operation of law enforcement authorities in all states to finally make it a truly equal society. The foundation for change had been laid but the work was far from done. Civil Rights in America - Question 2 "The civil rights movement achieved a great deal in the 1950s and 1960s." Do sources A-E prove that this interpretation is correct? In 1957, the first amendment was made to the Civil Rights Act in America designed to improve the living conditions and rights of black people in the country, following years of demonstrations, protests and campaigns. Four more amendments followed in the 1960s, designed to further enhance the rights of black people. The law changes were a sign that America was finally facing up to the fact that it had been discriminate towards black citizens and was an indication that things may be changing, however the law changes were not enough on their own and an improvement in the situation depended on the co-operation of the American white population in changing their ways and welcoming black people as equals in their society. Sources A-E help to give us an idea of how things were changing during that period of history and perhaps just as importantly in this case - what wasn't changing. ...read more.

The chart shows that before the act came into force, only one southern state, Florida, had above 50% of black citizens in a position where they were able to vote, however by 1971 that number had risen to seven states, showing that the act had in total increased the quantity of black voters in those states sampled. However when closer examining the chart there are indications that it wasn't as successful as could perhaps have been hoped. Many of the states did not show a huge increase in numbers and the figures in North Carolina even dropped a percent following the introduction of the act, showing that it failed to have any impact in those areas and more work was needed to increase the amount of black people that were registered to vote. Nevertheless, it was clear that improvements were beginning to be made and some states had excelled in their provision of the vote to black people, with a ten fold increase in numbers in Mississippi. Conclusion The civil rights acts that were drafted in and amended on numerous occasions had a very much mixed impact across America with improvements in some areas of living for black people but a lack of change or even deterioration in others. More people were beginning to be issued with the vote in the troubled southern states and education quality was gradually starting to rise, however the rates of change were still very slow and work still needed to be done to provide full equality in America. The violent events witnessed across many deprived areas of American cities between 1964 and 1967 highlighted the areas in which the civil rights acts had still failed to have much of an impact and showed that laws alone were not going to achieve equality, the people of America needed to be brought onto the side of equality and desegregation, and by the end of the 1960s that had still not happened in many areas of America. ?? ?? ?? ?? History Coursework J. Lee 1 ...read more.