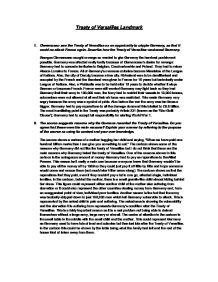 Treaty of Versailles Landmark 1. Clemenceau saw the Treaty of Versailles as an opportunity to cripple Germany, so that it could no attack France again. Describe how the Treaty of Versailles weakened Germany. Georges Clemenceau sought revenge so wanted to give Germany the harshest punishment possible. Germany was affected really badly because of Clemenceau's desire for revenge: Germany had to concede territories to Belgium, Czechoslovakia and Poland. They had to return Alsace-Lorraine to France. All of Germany's overseas colonies became Mandates of the League of Nations. Also, the city of Danzig became a free city. Rhineland was to be demilitarised and occupied by the French and the Saarland was given to France for 15 years but technically under League of Nations. ...read more.

2. The source suggests reasons why the Germans resented the Treaty of Versailles. Do you agree that these were the main reasons? Explain your answer by referring to the purpose of the source as using its content and your own knowledge. The source shows a cartoon of a mother hugging her child and saying, "When we have paid one hundred billion marks then I can give you something to eat." The cartoon shows some of the reasons why Germany did not like the treaty of Versailles but I do not think that these are the main reasons why Germany hated the treaty of Versailles. One of the reasons shown in this cartoon is the outrageous amount of money Germany had to pay as reparations to the Allied Powers. ...read more.

This is represented by the naked child in pain and suffering. The nakedness is showing its vulnerability and the starvation it is suffering from represents Germany's condition after the Treaty of Versailles. This is a fairly important reason as it is a real problem not being able to defend themselves without a large army, large navy or aircraft. The centre of attention in the cartoon is the small table in the middle with the small child and the mother. This could represent Germany as Germany used to have lots of land and colonies but then lost lots after the Treaty of Versailles. In the cartoon this could be shown by the table being what the family had left and the rest of the house kind of taken away from them. ...read more.