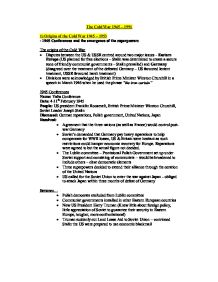 The Cold War 1945 - 1991 1) Origins of the Cold War 1945 - 1953 - 1945 Conferences and the emergence of the superpowers The origins of the Cold War * Disputes between the US & USSR centred around two major issues - Eastern Europe (US planned for free elections - Stalin was determined to create a secure zone of friendly communist governments - Stalin prevailed) and Germany (disagreed over the treatment of the defeated Germany - US favoured lenient treatment, USSR favoured harsh treatment) * Divisions were acknowledged by British Prime Minister Winston Churchill in a speech in March 1946 when he used the phrase "the iron curtain" 1945 Conferences Name: Yalta Conference Date: 4-11th February 1945 People: US president Franklin Roosevelt, British Prime Minister Winston Churchill, Soviet Leader Joseph Stalin Discussed: German reparations, Polish government, United Nations, Japan Resolved: * Agreement that the three nations (as well as France) would control post-war Germany * Soviet's demanded that Germany pay heavy reparations to help compensate for WWII losses, US & Britain were hesitant as such restrictions could hamper economic recovery for Europe. Reparations were agreed to but the actual figure not decided. * The Lublin committee - Provisional Polish Government set up under Soviet support and consisting of communists - would be broadened to include others - clear democratic elements * Three superpowers decided to extend their alliance through the ceration of the United Nations * US called for the Soviet Union to enter the war against Japan - obliged to attack Japan within three months of defeat of Germany Between... * Polish democrats excluded from Lublin committee * Communist governments installed in other Eastern European countries * New US President Harry Truman (Knew little about foreign policy, little appreciation of Soviet to guarantee their security in Eastern Europe, tougher, more confrontational) * Truman suddenly cut Lend Lease Aid to Soviet Union - convinced Stalin the US were prepared to use economic blackmail Name: Potsdam Conference - held in Germany Date: 17th ...read more.

- The US wished to continue the arms race through countering the Soviet conventional superiority in central Europe as a result consolidating US freedom of action around the globe - The Soviet Union countered this, with a massive recruitment program, adding 3 million troops to the Red Army Changes in the leader of the arms race - In response to the Warsaw Pact the US developed a popular form of long rang combat - intercontinental bombers - able to drop explosives on the opposing nation - Lead in the arms race changed in 1957 when the Soviets successfully tested an intercontinental ballistic missile in addition to its already potent intermediate-range strike force - gave them the facility of striking numerous targets in both the US & Western Europe The threat is heightened - Soviets take the upper hand - Analysts gauged the warning time of the missiles to be minutes rather than hours - more chance of a surprise attack - a surprise attack which could completely destroy the US's potential to wage a nuclear war - Soviets posed a serious threat to the security of the US - superpower rivalry at its highpoint US catches up - Under the leadership of Eisenhower the US deployed missile and bomber facilities in Western Europe which were a close enough proximity to the Soviet Union to ensure there was a capability to strike - The USA's first inter-continetnal ballistic missile went on Alert in October 1959 - major step towards the theory of "mutually assured destruction" and enough to give the US an upper hand US surged ahead in the contest with JKF convincing Congress to increase military funding by 15% 1962 - Arms race takes a particularly sinister turn when the USA discovers Soivet missile bases in Cuba Soviet Union develops naval access 1964 - Naval access to the Mediterranean 1968 - Naval access to the Indian Ocean Naval facilities in Eygpt, Syria, South Yemen and the Seychelles The US surges ahead while the Soviets ...read more.

the Russian President, Boris Yeltsin - accelerated change * Gorbachev dissolved the Communist Party, granted the Baltic states their independence and proposed a much looser economic federation between the remaining republics * The formation of the Commonwealth of Independent States (CIS) on 8th December 1991 made the Soviet Federal government redundant * 25th Dec - Gorbachev resigned as president and the USSR ceased to exist on the 31st December 1991 Why did the cold war end? - Had to end sooner or later - the old bipolar world of the superpowers was giving way to a multi-polar world with new power centres, e.g. China and Japan - boths uperpowers were at risk of being bypassed if they didn't address such issues such as technological development - There's a view that Reagan brought the Cold War to an end - SDI meant that the Soviets would have to match US technology - couldn't afford it and had to give up the cold war - part of a larger view that argues American won the Cold War, "The West, and especially the U.S. had shown remarkable patience and had practiced prudence in its statecract to bring about the victory" (Ambrose) - View that the Cold War "represented not so much a victory for one side as a matter of the other side declining to continue to take part in the contest" (McLean) - Cold War ended because the Soviet System collapsed - not just because of Reagan - failure fo communism was evident for some time, disguised by USSR's status, Gorbachev reforms revealed the extent of the problems - Gorbachev must be given credit - Nobel Peace Prize in 1990 - had the courage and foresigh to look at things in a new way and take radical actions - compromised in a way that was completely new for a Cold War leader - "he compromised on long-held Soviet claism and accepted many of the premises of the US negotiating position" - (Kissinger) ?? ?? ?? ?? ...read more.